Almost a year ago, I bought this box of '94/95 Parkhurst from my newly discovered local card shop. I just got around to busting it a week ago or so. Yeah, that's how I roll. 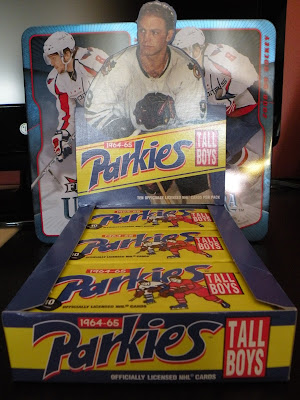 Anyways, there isn't a lot of information available on this set, so I'm kinda winging it here. Near as I can tell, it's a reproduction of the 1964/65 Parhurst Tall Boy set. 180 cards in the set. 24 packs in teh box, 10 cards per pack.

I have no idea if the originals came 10 per pack, but I doubt it. I'm ashamed to admit that I don't have any of the original '64/65 Tall Boys in my greedy little mitts collection.

Let's take a look at thes colourful cards. I have to admit, it was a blast pulling all of these names out of packs.
Jean Beliveau 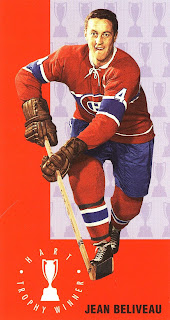 Charlie Hodge and his first mask. 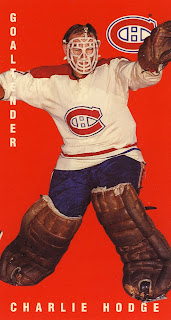 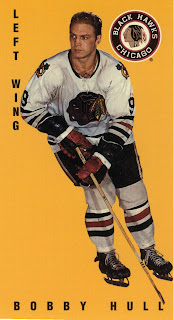 Tim Horton. I always feel like getting a coffee when I pull one of his cards, and I don't even drink the stuff. 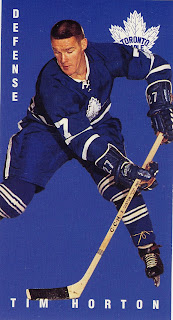 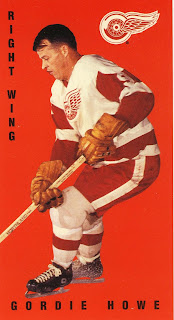 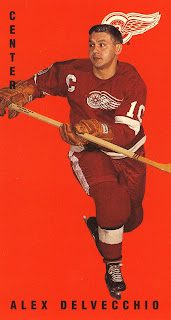 Jacques Plante as a Ranger. Gotta give the Blueshirts some love. 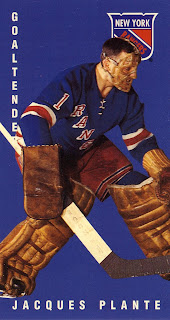 and lastly, a Bruin. Wayne Cashman to be precise. Wayne would later become captain of the Bruins during Don Cherry's tenure as coach. 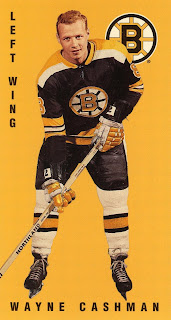 For those of you unfortunate enough to not be familiar with the Tall Boy cards, here's a comparison for you. 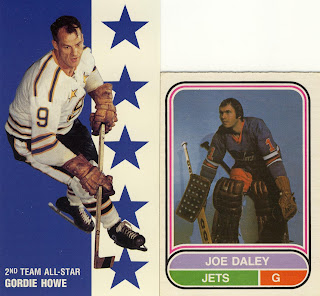 Now here's my dilemma. I made a complete set out of 23 packs. Which, for you math majors at home, I have one unopened pack left.

This set has three different insert sets to chase. First, American/Canadian Greats at a rate of 1:126. Or 1 every 5 1/2 boxes. And I pulled one!!! None other than the Big Train himself, Lionel Conacher. 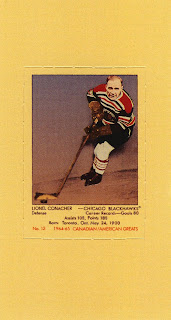 Seriously, if you've never heard of the dude, read up on him. Awesome. These inserts are done up in the '51/52 Parhurst style.
Next we have Future Star cards at 1:32 of which I did not pull any. And finally autographs. Yes, this set came with autographs of all the surviving members, inserted at 1:261 or 1 every 11 boxes.

Should I open that last pack looking for an elusive auto???? Or just leave it be, preserved for all time?
Posted by Captain Canuck at 2:55 PM