Who? St Louis Blues goalie Jaroslav Halak.
I wrote to both Blues goaltenders during training camp at the start of this season. Halak returned his in about six weeks. Their other goalie, Brian Elliott, I'm still waiting for. *fingers crossed*
Jaro is having his best season of his brief career this year. Regaining the form of his playoff drive with Montreal a couple of seasons ago, Jaro is 25-11-7 with a 1.92 GAA and 6 shutouts so far this year. He will certainly be in the Vezina conversation at the season's end. He and Elliott will definitely win the Bill Jennings Award for best team goaltending.
Jaro signed both of the 8x10`s I sent him.... 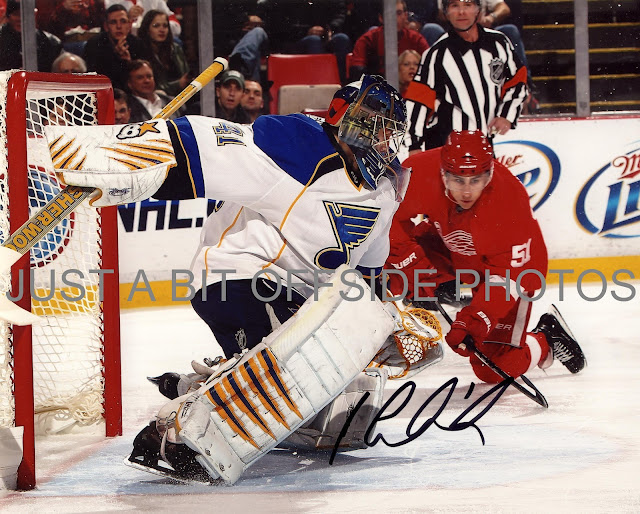 Great artwork of Jacques Plante on the side of his mask.... 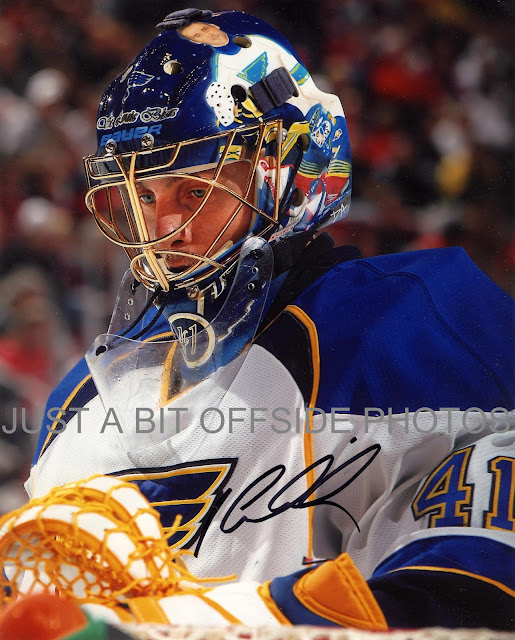 Thanks Jaro!! and good luck in the playoffs!
Posted by Captain Canuck at 4:27 PM 6 comments: 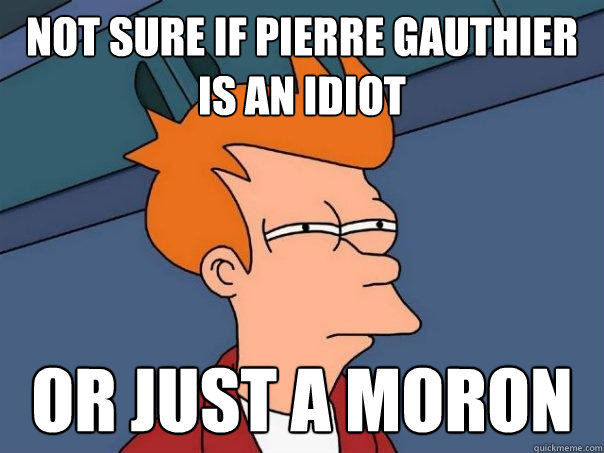 About frakkin' time!!! If you'd like the particulars, LINK.

The thought of a world without Gauthier fills me with delight!!!
(props if you get the movie reference.)
Posted by Captain Canuck at 3:14 PM 6 comments:

Looks like you know your hockey.
Yes, the last, and first, number 60 to score a goal for Montreal was indeed 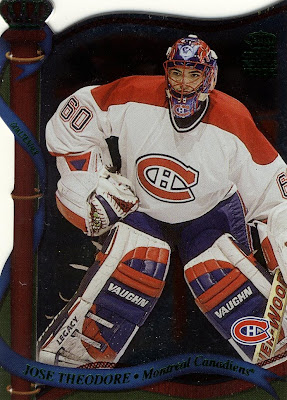 Goaltender Jose Theodore.
On January 3,2002, Jose became the second goalie in NHL history to score a goal and record a shutout in the same game.

Posted by Captain Canuck at 10:42 AM No comments:

Late Night Quickie..... trivia, that is.

Welcome to late night trivia, Habs style. For those of you who watched Montreal and the Islanders tonight, this one will be easy. Maybe let some others take a guess.
Montreal rookie Aaron Palushaj scored his first NHL goal tonight in the first period against goalie Al Montoya of the NY Islanders.
In doing so he became the 2nd player wearing the number 60 to score a goal in the history of the Montreal Canadiens. 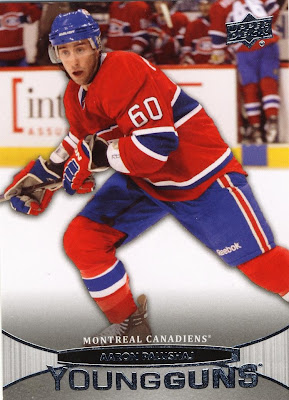 My simple question is, Who was the first?

All winning answers can help themselves to my internet cookies.
Posted by Captain Canuck at 8:27 PM 2 comments:

As the season winds down, I find myself purchasing less and less. This is a good thing however, as with my newfound energy into organizing and updating my want/set lists, my purchasing has become more focused. And focus is a very good thing.
So now I'm buying cards off of my wantlists! Imagine! Buying cards you actually need. Or I'm buying cards for my player collections.
Nice. Yay me. Somebody be proud of me. My wife has yet to recognize my greatness. Despite me trying to explain it to her several times. Go figure.
Anyways, you didn't come here to listen to me ramble about spiritual cardenlightenment. And yes, that IS a word. You came here for pictures.
Here ya go.
This Young Gun from UD Series 2 was not priced when I first arrived at this particular table. Nor was any other card. They said they were just starting on pricing. I said I`d be back. 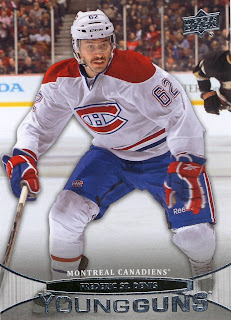 Good times when banter becomes a feature at the local card show.

Moving on to less painfull or at least, quicker purchases. 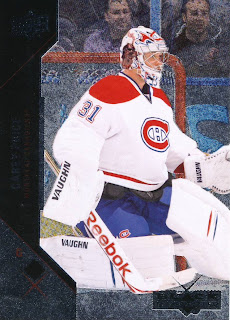 and I debated over the next purchase. He's not on any of my lists nor a player collection of mine. He's not even a player. But for $2, I nabbed an on card auto of one of Canada's greatest Olympic athletes. 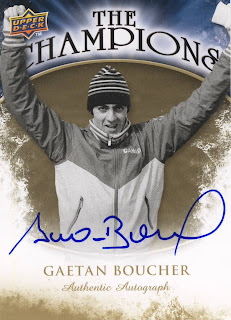 Back to my adding more to my pc, from the same $2 box I added this dual relic Andrei Markov /125. 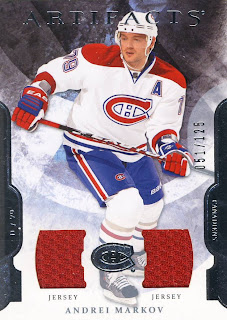 That very same night, Andrei played his first game back from injury in two years. After watching him that game, as well as in tonight's game, I see he is back and well worth the 5 mil he's signed for next year. Stay Healthy my friend. We need you.

The final card I'm showing you came to me for $5. A brand new shiny card of a vintage player who retired 32 years ago. 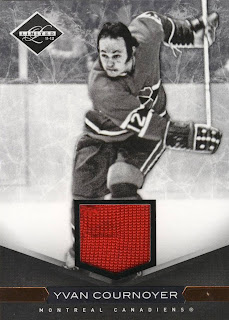 A game used Yvan Cournoyer. Normally these cards of retro players are all event worn pieces. But not this one. That, combined with the player choice, and that the swatch is torn = had to have it.

You ever been to sea, Billy?

I mentioned that I found a 15 for a $1 box at the last card show. Here are a feww goodies from that box. All from the same set.
They were issued around 1993.... sometime. Maybe 1994. They were a food insert put out by Captain Highliner Fish products.
Buy a box of Fish n' Chips, get a free hockey card. Makes sense to me.
They featured some recently retired greats like Tony Esposito. 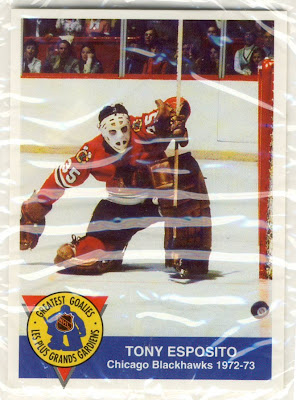 And Bernie Parent. These cards are still sealed in their original cellophane protective wrapper. 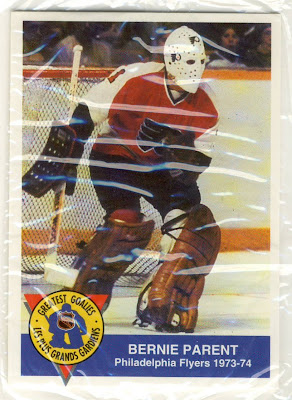 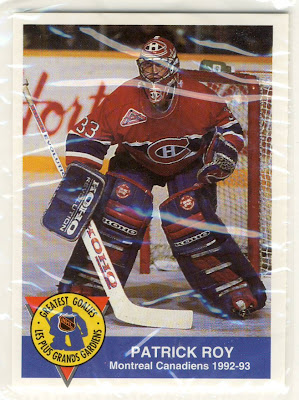 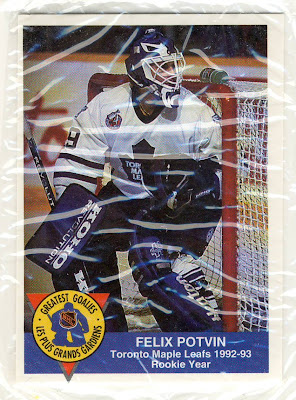 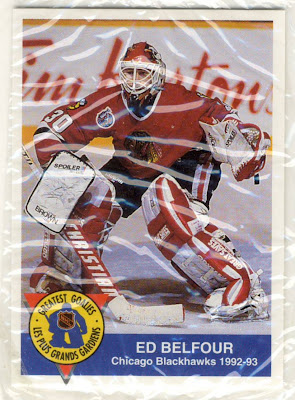 Also included were all time greats like Jacques Plante 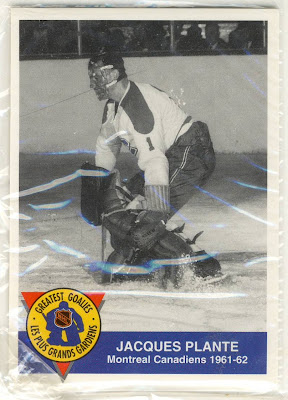 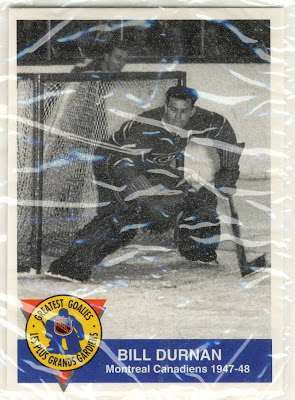 I actually picked up two of Bill... so I'll show you the backs. 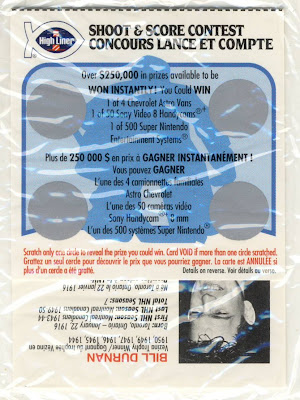 uh... the upside down version of the backs. It showed another picture of the goalie, personal information, and stats. Along the bottom edge was a scratch off game to win valuble prizes! That edge was perforated so you could remove the game and keep the card. Standard size cards of 2 1/2x3 1/2.

I have no idea who is in this set or how many cards there are to it. Maybe someone with Beckett Online or some such checklist site can enlighten me. But I like the ones I see so far.

I miss stuff like this. Food issues were awesome. Captain Highliner fishsticks were not.
Posted by Captain Canuck at 4:18 PM 3 comments:

Another trade night last night... It had a good turn out, a few new faces, a few new trade boxes to look through.
One guy I've always wanted to trade with was there last night. Now you have to understand what I mean.... this guy sneaks in an hour or so into the evening, stays for 30 minutes, and then leaves. And I never manage to trade with him even though he always has cool cards. This time, I got him.
A simple two for two swap. Here's the main piece that I received.... 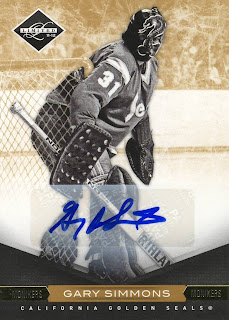 a 2011 Limited Gary Simmons auto. Awesome. Some of you may remember me posting my TTM success with The Cobra. Now I have a certified auto to go with it.
I didn't realize until today while scanning the card that it was /25. 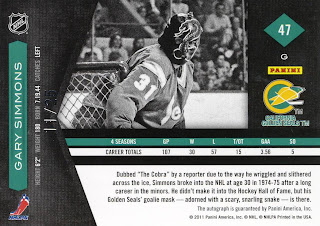 What did I have to give up in return in order to obtain such magnifigance? I said goodbye to this on card auto of Flyer great, Reggie Leach. 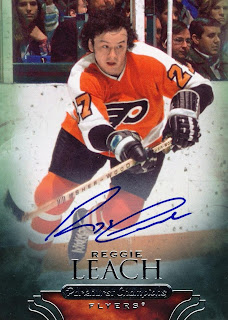 I also snagged this Carey Price Artifacts Green /99 in exchange for a Bob Bourne rookie. 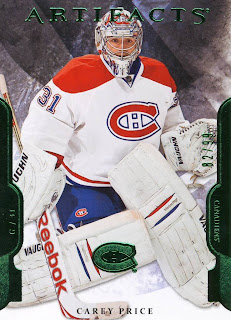 If you're young, Hockey-Reference.com will tell you about Mr Bourne.

The other two hockey cards I acquired were for my chase of the 2011-12 Parkhurst Champions set. Although it took some doing. This Black and White Rendition of Patrick Roy was traded no less than 4 times last night before I finally tacked it down. 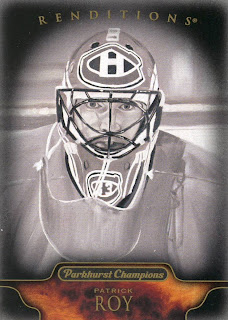 Everytime I tried to trade for it, I was informed it had just been traded to someone else. After awhile, I thought they were messing with me....
I had to part with a Wayne Gretzky hologram from the 1991 McDonalds set for Sir Patrick.

And finally, the last file photo I needed. Orr vs Esposito All Star edition. 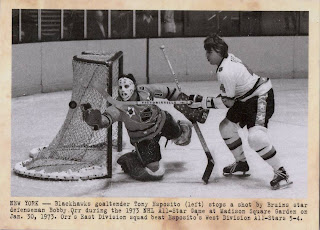 This one was free. Gratis. He knew I needed it and just handed it to me as I was leaving.
Nice.

All in all I was sad to see the Leach auto go, but it didn't really fit into my collection. The Cobra does. And rather well too....
Posted by Captain Canuck at 7:51 PM 2 comments: