I suppose I had best talk about the last trade night of 2012 seeing as the first trade night of 2013 is in four days.
2013. Wow. I remember when I was just a timbit, (you non-Canadians may not get that reference) I used to think how cool it would be if I lived long enough to see 2013. I was born on the 13th, and I could then have a whole year with 13 in it.
Hey, I was 5. Don't judge.
Back to tradenight. There was quite a spread of food... but I was a good boy and avoided all but the vegetable platter. Save for one small sliver of pepperoni pizza. This was the night I posted about earlier on Waxaholic where I won movie passes from the mystery gift boxes that were handed out.
Believe it or not, there was actual trading of cards as well.
Here's what I came home with. Hmm, if I had a blog in my 20's, the subject of what I came home with at the end of the night would be MUCH different.
Moving on.....
from the much maligned Panini set, Classic Signatures, a hard signed Bob Gainey. 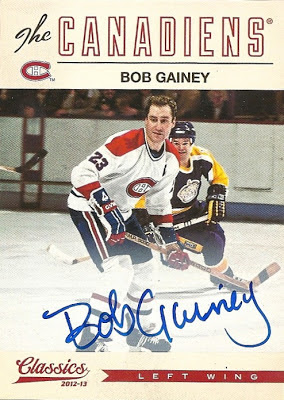 I was thrilled to add this card to my collection as it is my first Gainey auto, and the card is pretty cool with Marcel Dionne closing in from the background. Nice sig Bob.

Speaking of nice sigs, I added another Hall of Famer in Gilbert Perreault. I have another Perreault, but this one is nicer. 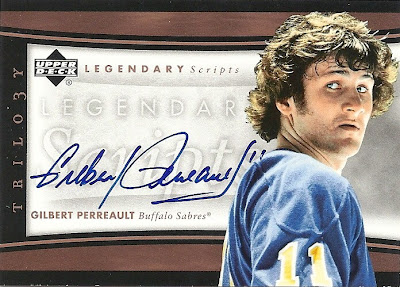 from 2005-06 Trilogy, this card has copper stripes with a matte finish everywhere except for the cutout of Gilbert, which is glossy. It's a super looking card. Well done. 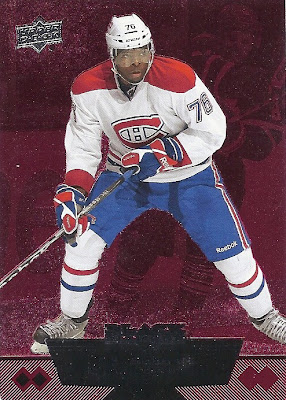 Now I just need the base, Emerald, and Sapphire versions. The Ruby is /100.... no idea about the others.

The next two cards I "traded" for, but in all honestly were just gifts from other collectors. I tried to give more for them, but they both insisted I take them. I love this hobby. You meet some really great people.

Both from 2011-12 Panin Prime, both featuring Montreal defenceman Raphael Diaz. 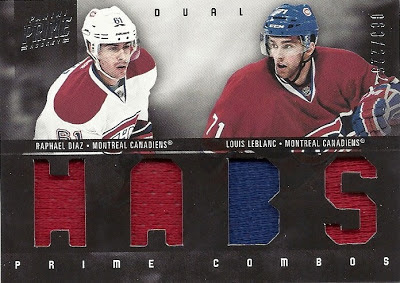 Raffy is not my favourite defenceman, nor in the top 3, but I can`t refuse cards like this. 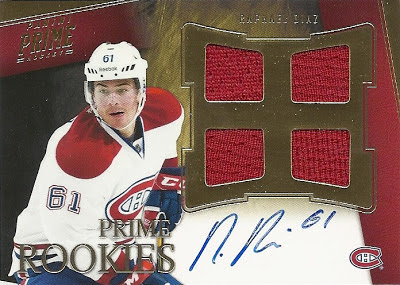 My Swiss friend does need to work on his sig though.... Raffy, look at Bob`s or Gilbert`s and take notes. No Raffy, not shorthand..... write it out in cursive son....


..... Like former Hab defenceman and Hall of Famer Larry Robinson. 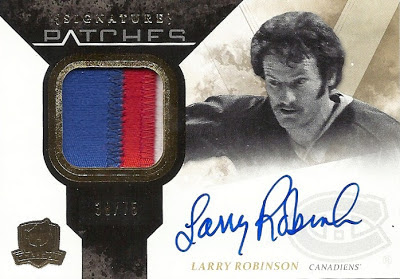 out of /75 this is one for my growing Larry Robinson collection. Not a bad little card, although a colour photo would be much better.
All in all a great evening.
Thanks to all I met, traded with, talked to, or emailed in 2012. Hopefully that will continue in 2013 along with meeting a few new folks as well.
Happy New Year.

a couple of weeks ago, I posted my ITG Forever Rivals Dream Break. If you didn't read it, go now, it'll explain what I'm doing here.....

Now for this pack, it's not exactly my Dream Pack, but the cards are still pretty good. Probably better than what I would pull knowing my luck.

Here's what I came up with for pack two. (all prices in Canadian) 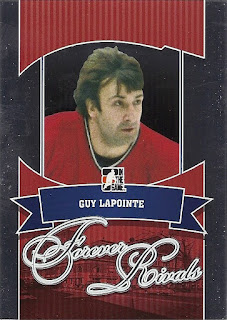 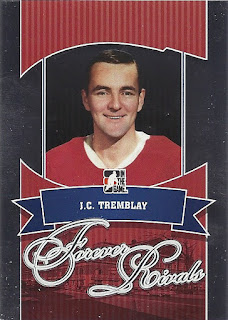 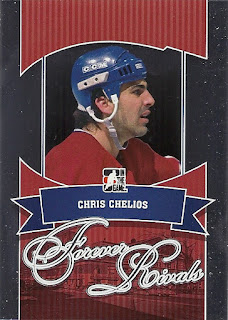 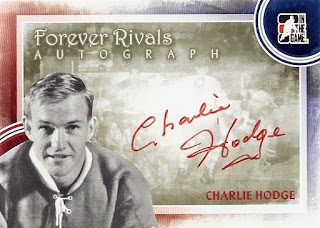 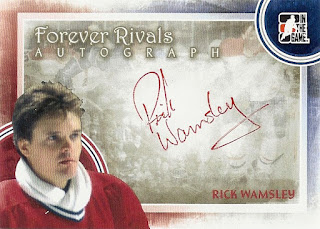 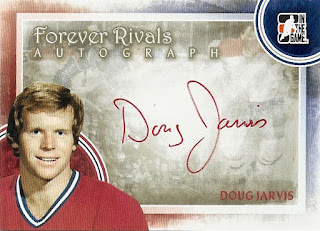 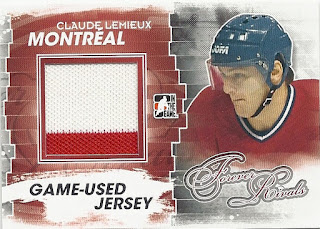 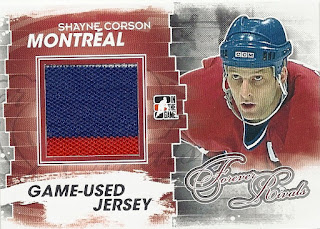 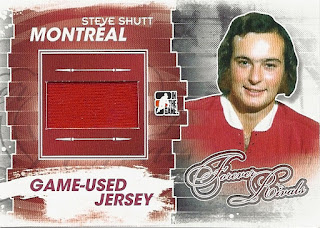 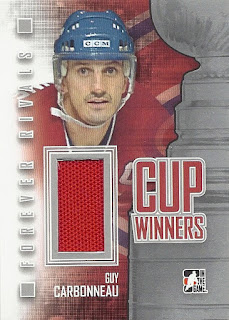 Now you should know by now that I don't like the base inserts... so I replaced them with autographs. Hey, it's my pack.

Jean-Guy Talbot - traded an auto that I bought at a card show for .50 cents. 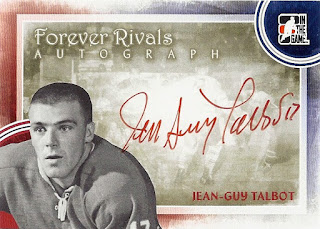 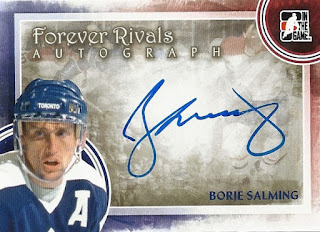 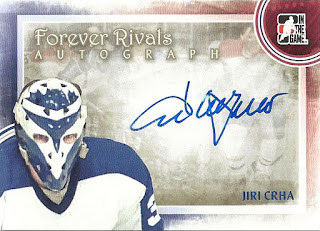 
Yikes. Looks like I saved money on that one.
Posted by Captain Canuck at 2:57 PM 3 comments:

I wrote to Gilles Villemure a little while ago. A couple of weeks later he returned my stuff all signed in bright blue sharpie.

Gilles Villemure was a longtime goalie for the New York Rangers before finishing his career with the Chicago Black Hawks.

Gilles never really got a shot early on in his career, playing in only 13 games in his first 6 seasons. But once he got his shot, he made the most of it, making the All Star team in the next three years and winning the Vezina trophy as top keeper.

He also made this nifty mask. 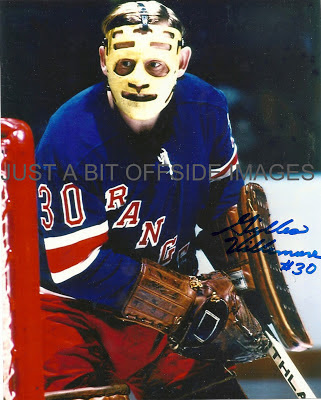 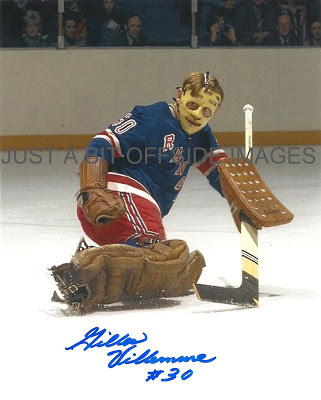 Gilles also played for the Vancouver Canucks. But that was for them in the WHL. 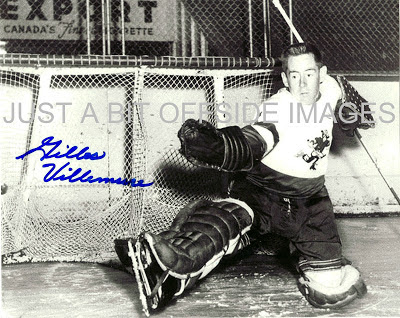 I don't know what I like more, the net with the old style boards, the chain link, the old advertising, or the Johnny Canuck logo on his sweater.
It's all awesome.
Besides the 8x10's, Gilles also signed some cards I sent.

Trade night at the local shop was last night... lots of good discussion and catching up, despite the best efforts of the idiots in New York who are trying their best to destroy our National Pastime.
Of course it's also Xmas time... and despite some amazing sales going on... I held fast and didn't purchase any boxes, just some much needed supplies. Hopefully I'll have some cash left over in January to spluge on cards. Hopefully.
I only pulled off a couple of trades. The first was on a set that I've been working on since the day it came out. 2012 ITG BTP Masked Men Ruby Die Cut.
Jonathan Quick has joined the party.

Do you remember when I acquired this? 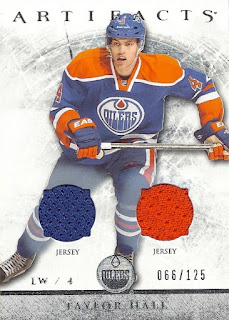 Did I show this off? I can't remember... Anyways... I managed to trade off Taylor in exchange for
another Ultimate auto, this time Guy Carbonneau.... 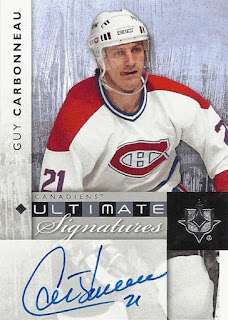 The only other acquisition was a gift. A buddy gave me this 2009/10 Fleer Ultra eX insert of Carey Price. It is a sweeeeeeet card. Acetate, diecut, and in full relief. Beauty!

I also got a handfull of basecards from that same set.... 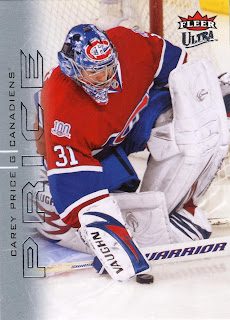 That's my randomness for today.... there's a card show tomorrow. I wonder if I'll be able to go and NOT spend any money.
We'll see.
Any odds?
Posted by Captain Canuck at 1:45 PM 3 comments: