Caving In at the Card Show

The monthly card show was last weekend. It wasn't a great show to be sure. Being just before Xmas, I wasn't even going to go because I wasn't going to spend any $$$, saving that because of being Santa's proxy.
But I decided to go and wish a Merry Ho Ho to a few people that I don't see a lot of the time other than at card centric functions.
Got that? Go, say hi, do NOT spend money.
You're snickering right now.... I can hear it....
Okay, you're right, I did spend a little, but it's NOT MY FAULT!.
Let me explain.
A new product came out last week, Upper Deck's Team Canada. It's a sweet product. Right in my wheelhouse as it were. If it's Team Canada, it's me. I am Captain Canuck after all....
But, it is also Xmas. So no wax cracking for me. This will continue into January because, well Boxing week shopping is almost as bad.
But as I walk into the show, a buddy of mine that sets up there every month pulls out a small stack of cards and hands them to me.
He had busted a bunch of Team Canada, and had pulled some cards for me.
Now how can I tell him to pack sand when he went through all that trouble??? How rude!
So I flip through the cards and ask him how much? He explains them to me so I know what I'm purchasing... I call this "softening me up for the big hit", but it wasn't that bad.
The first few base cards (5 in all) he gave to me free if I bought the other three cards. Done. He always gives me a good deal.
The base are really nice. My only issue is there are no stats, only a write up on the back. 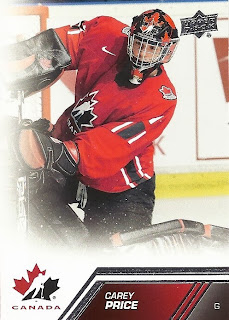 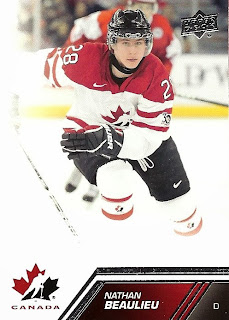 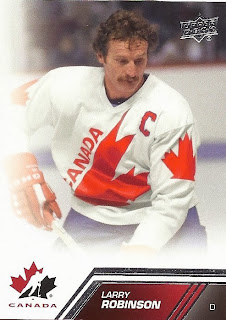 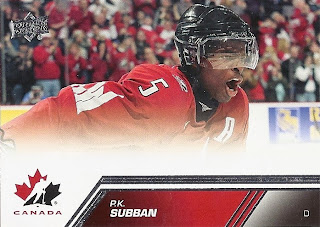 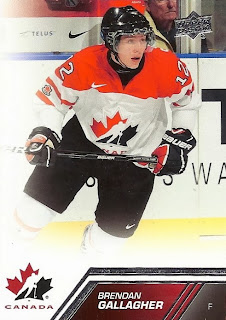 Now the cards I had to actually pay for. I spent $5 for these three. (see? Not so bad?)

Apparently this Gallagher Program of Excellence is a super duper ultra rare Snuffleupagus short print. Nabbed it for $3. 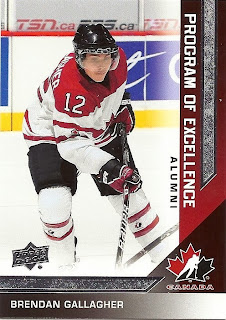 Then two inserts from the Special Edition set.
Carey Price 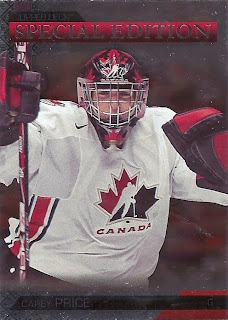 and Brendan Gallagher again. Each for $1. 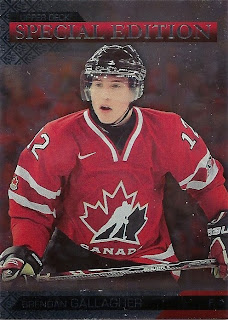 I also grabbed the P.K. Subban from this insert set from one of the local card shops for another $1.


So okay. Spending $5 wasn't that bad. But then I found out that another seller had updated his dollar box.

Okay, a quick look, no harm in that, right?

First up, a black bordered Lars Eller from Victory. Again, apparently these are hard to pull. For a buck he goes in my Lars Eller binder. 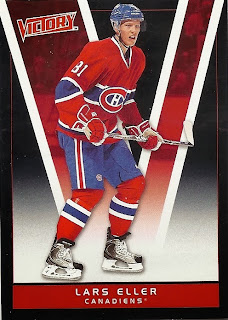 Yes, I have a Lars Eller binder. Don't judge me. 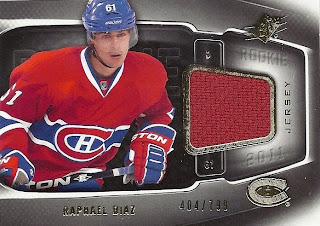 I couldn't leave Raffy behind. He looks so sad....

An on card auto of then Leafs 'tender, Jonas Gustavsson. I really like that particular year's Private Signings. Panini doesn't do much of anything right, so when they do, I have to give them props. 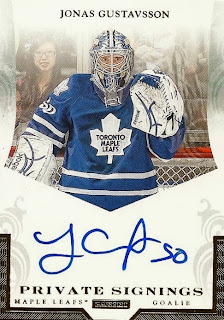 A rookie double swatch of Louis Leblanc. Last year this was around $40. Now, a buck. 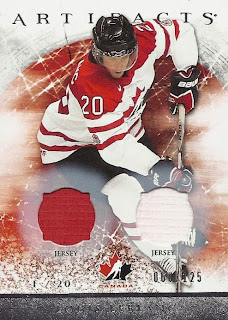 I tried to explain to people last year, but no one listens.... Anyways, for a card out of /125 and he's in his Team Canada gear, I'll take it.

And finally a card that is just flat out awesome. 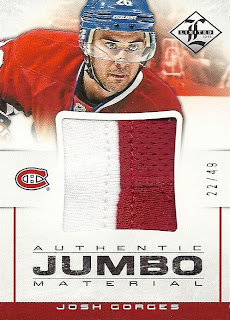 Josh Gorges from Limited. The seam is so thick it's busting out of the card. It's like an ITG product, except for the Limited logo in the corner. And it's /49 too. A really clean design and a great swatch.


So fine. I caved and spent $10. What are you going to do? Kick me out of the union? Ha! You've all done it. You were hoping I did it too... that's why you're here reading this drivel.

I went to a card show and what did I buy?

if you've been following along on Waxaholic, (and if not, what the hell man?) you've seen the true vintage baseball that I picked up at the last show. A 1940 Play Ball and two 1956 Topps... so the question is, did I grab any vintage hockey as well?
And the answer is..... no.
I could've. But the player selection vs the cost ratio was imbalanced. So I satisfied myself with baseball, and went new on the hockey.
At the time is was very unsatisfying to look through all the shiny multi coloured patch autos fresh from their bright wrappers after being around real baseball cards.
But looking back on it now, I like what I got. So I'm pleased with the overall experience.
Here's what I grabbed. No real rhyme or reason to it... just cards of players from my team. I don't know why I brought my want lists to this show... no one had any boxes to dig through.
An oversized box topper rookie MVP of Alex Galchenyuk. $3. 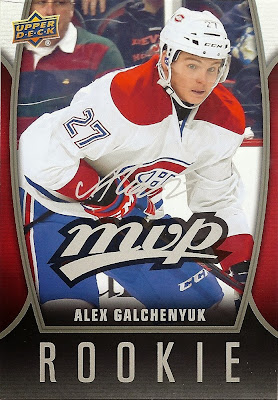 And his regular sized friend. $2. 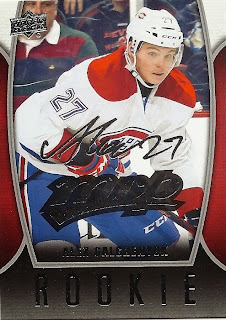 My first Young Gun of the brand new Upper Deck offering. This one of defenceman Nathan Beaulieu. $2 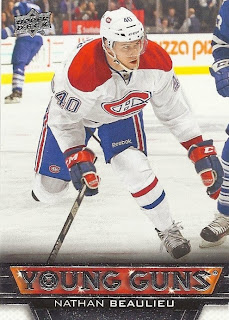 And a freebie! I got all four of these cards from the same guy, this Alex was thrown in for free. Yay free! 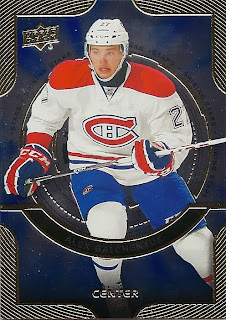 Another freebie! Blogger put these out of order, but this auto was thrown in for free with the purchase of the next card which is.... 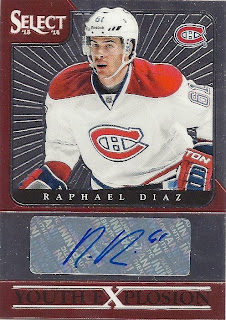 A cool insert of Carey Price for $3. 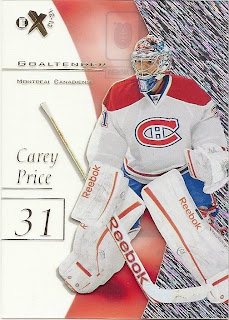 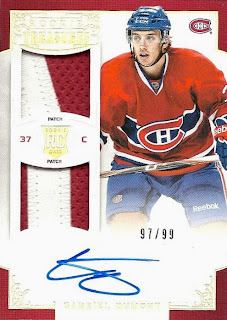 My most expensive card of the lot, a $5 insert of Jarred Tinordi. It's shiny, it's purple. 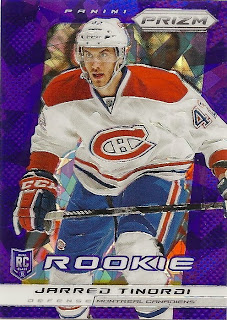 My wife really likes that one.


So not exactly the same provenance as the baseball, but I had fun with it. And they look good in my player binders.
I just wish I knew if that purple one was rare or not so I know if I got stiffed.

I think I got stiffed.
Posted by Captain Canuck at 11:09 AM 2 comments: