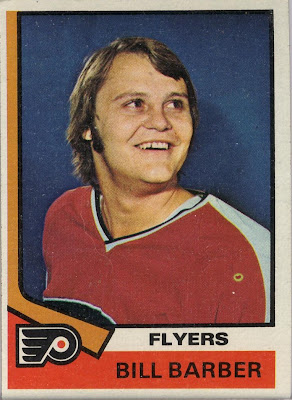 Bill Barber was part of the famed LCB line for the Flyers. (Reggie Leach, Bobby Clark, and Barber). Drafted 7th overall in 1972, he was called up after only 11 games in the minors and scored 30 goals in his rookie year. The Flyers went on to win the next two Stanley Cups.
Barber was forced to retire in 1984 after a major knee injury, retiring as Captain, and is still the Flyers record holder for most goals scored at 420.
The Flyers retired his number (7) in 1990, just after Bill was elected into Hockey's Hall of Fame. 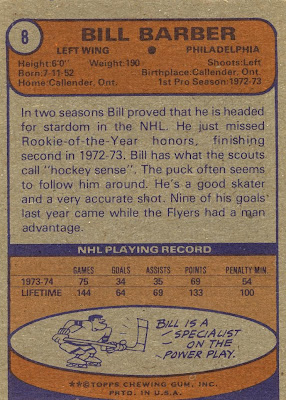 The cartoon says Bill is a power play specialist. Let's see... 104 of his 420 goals were with the man advantage, so yes, the cartoon speaks the truth.

Bill went on to a coaching career, starting in the AHL with the Philadelphia Phantoms. Part way through the 2000/01 season, he was promoted to head coach of the Philadelphia Flyers. Bill coached the last 54 games of the 82 game season, going 38-16, and winning the Jac Adams trophy as Coach of the Year. The next season saw him go 49-30, guiding the Flyers to first place. He was fired a week later. He has not coached since. You figure it out and let me know.