Generosity. Pass it on.

One of the greatest attributes of this hobby is the generosity from fellow addicts. As the card shows and trade nights roll along, friendships develop. You start keeping an eagle eye out for not just stuff for your collection, but cool things for people you know as well.

I was the beneficiary of this at the last card show. Instead of rolling out my purchases, (you may still see some of it later) I thought I'd show off two gifts that were by far, the treasures of the day.

From fellow blogger, bamlinden, of My Hockey Card Obsession fame, presented me with these two beauties for my Lyle Odelein pc. Two media slides from the late 90's.
My scanner decided not to participate this evening, but you get the gist anyways. These are awesome. Not found on any checklist by any means, but a more than welcome addition to the binder. Plus I can now make as many 8x10's of Lyle as I want. World domination to follow I'm sure. 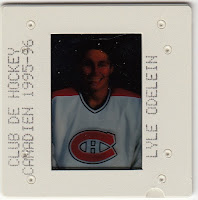 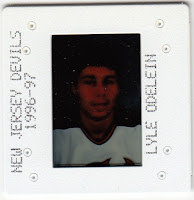 Next up was from one of the sellers that has been setting up recently. We'll call him Vintage guy here. We'll call him that because to him a new card is something from 1985.
Because of our common collections, we've done our share of conversing. During those he discovered, and remembered, my ongoing collection of Joe and Jimmy Watson.
He's getting ready to move across country for his retirement soon. During his packing, cleaning, etc... he came across some odd ball items from the 1976 Canada Cup. On Canada's roster was a very young 22 year old puck moving defenseman named.... Jimmy Watson. In his second year in the league, here he was on the grand stage. And Vintage Guy had original 8x10's and post cards of most of the players. 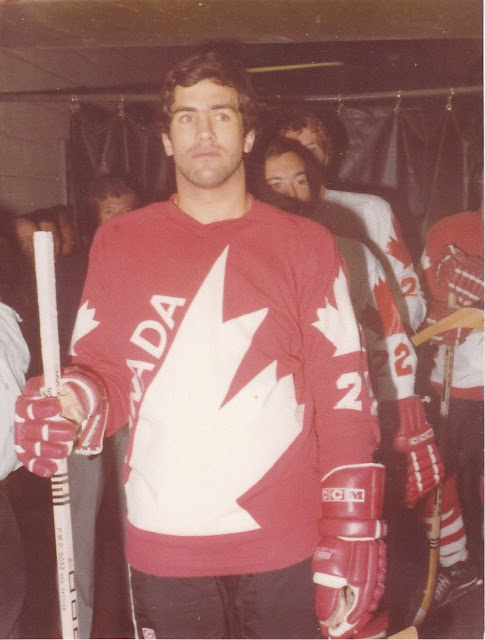 I love it. And, like the Odelein slides, it's something I've never seen before. In person or online.
Perfect.

Just when I needed a hobby pick me up. Thanks guys.
Posted by Captain Canuck at 8:33 PM 1 comment: 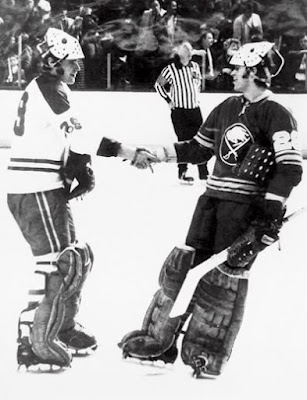 Two brothers playing goal against each other in an NHL game. Rookie Ken Dryden against his older brother Dave and the first year expansion Buffalo Sabres.
The story is well known. If, somehow you haven't heard it, google is your friend.

To my knowledge, the Drydens are still the only pair to do it, although the Pickards could one day accomplish it.

*I believe this picture is from the second time they played against each other. I don't have a decent pic of them from their first meeting.
Posted by Captain Canuck at 5:28 PM 2 comments: