I was thrilled to get back a ttm request from Charlie Simmer. It took 98 days, which at first seems odd as Charlie lives about 8 kilometres from my house. But his job as the Calgary Flames colour commentator has him travelling with the team, so it's really not that bad.
Charlie Simmer was the left wing on the Triple Crown line consisting of him, Marcel Dionne and Dave Taylor. They were unstoppable in the early '80's. In '79/80, Charlie posted 56 goals and 45 assists for 101 points in only 64 games, becoming the second player ever to score at least 50 goals and not record a hat trick. In the '80/81 season, Charlie had a great year improving to 56 goals and 49 assists for 105 points in only 65 games.  The day after the season ended, he married Terri Welles. Terri was better known as the 1981 Playboy Playmate of the Year.
Like I said, Charlie had a really good year.
The first photo is amazing in it's awesomeness... first, we have the gold and royal sweaters from the Kings. Next, the old Colorado Rockies, and finally, Charlie's trademark moustache. 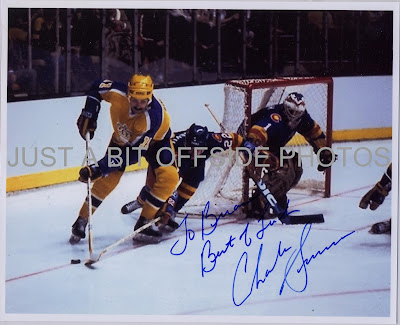 Next up, a pic of the Triple Crown line at the All Star Game. You don't see entire lines going to All Star Games anymore. I love that they are still wearing their Kings breezers and socks. This photo is now on it's way to Dave Taylor.... 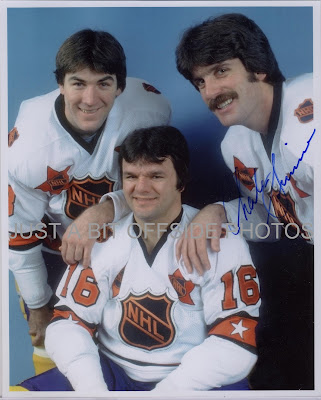 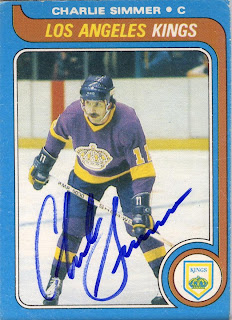 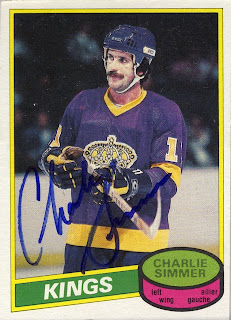 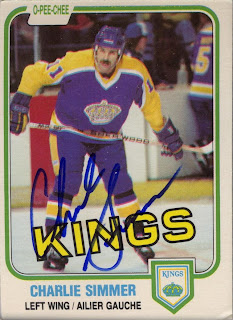 Charlie had played with the California Seals and the Cleveland Barons for three seasons before joining the Kings in 1977, I wish there had been a card made of him in those uni's... I would love to get those auto'd.
I may have to make one now....
Posted by Captain Canuck at 2:34 PM