*****okay, so maybe it's been seen, how would I know? I was standing in the cardshop when it was delivered and got the first pack, so it's brand new to me. It was suppposed to be out yesterday, arrived today... what are you gonna do?
Here we go. One pack. 4 cards. $8. I must be crazy.....
It says to look for AWESOME SIGNED ROOKIE JERSEY* CARDS!!! 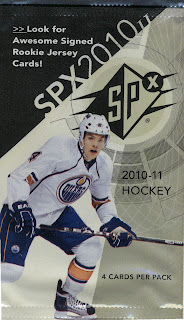 *Okay, first off, it's a sweater. Not a jersey. Football players wear jerseys. Hockey players wear sweaters. Get it straight.
Second, I opened the pack and looked, and I'm still looking. When do they appear?? 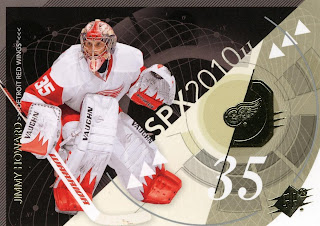 the cards are less shiny than previous years and are cursed with the abominable gold foil.

Marian Hossa. Marian switches teams like some people switch socks. He played in 17 (slight exaggeration) straight Stanley Cup Finals without winning until finally getting his ring with the Hawks. 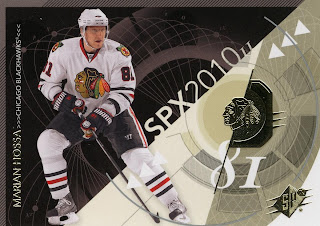 Eric Staal. You may have seen Eric hosting the All Star game over the weekend. He did more for the game in one weekend than that idiot Bettman has in 18 freakin' years. But I digress. 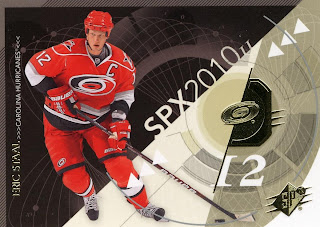 and my fourth card is not an AWESOME SIGNED ROOKIE JERSEY CARD, nor is it a signed card, nor a jersey card, but (yes Tricia) another base card. 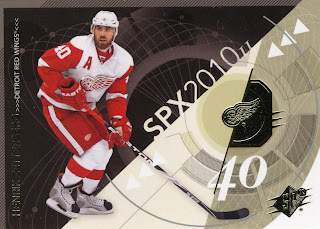 The backs are plain and lifeless. Because of the horizontal theme, career stats are not an option. Although an inch of legaleese at the bottom doesn't help either. 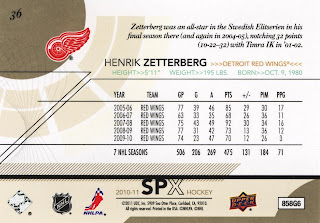 There you have it. Why people buy this is beyond me. And they call us set collectors crazy. Whatever.
Wait, buy your singles off of Sportslots or the 'bay.
I'll look for a base set cheap and use 'em for autographs...
Posted by Captain Canuck at 9:03 PM