Where to start with this great TTM success? Well for one, Dennis Maruk was a great sniper on some really horrible teams in the '70's. Two, for a really small guy (5'8"), he could really skate and had a powerful shot. 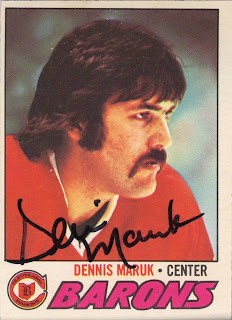 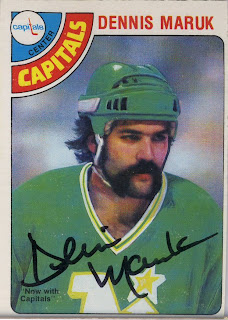 and finally four, Dennis returned these signed cards to me over two YEARS after I sent them out to him. 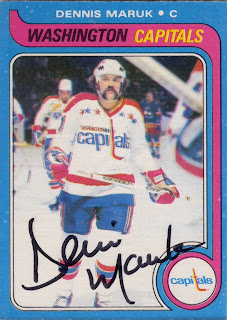 Some things are worth the wait. Thanks Dennis.
Posted by Captain Canuck at 4:02 PM 5 comments:

Tough as a wooden nickel

Okay, so maybe I'm mixing metaphors here... it wouldn't be the first time.
Over on Waxaholic, I promised you some Enforcers tonight. And that's just what I'm going to give you.
When I was browsing through the .25 cent binder at the last card show, I found a bunch of these Enforcer short prints from the 2006/07 Parkhurst set. I grabbed as many as I could. 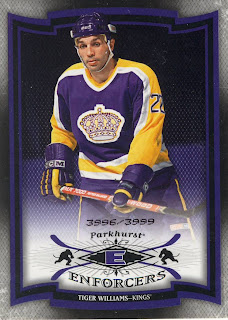 Here we see Tiger in classic Kings garb. And we go old school as well... Bill Gadsby ladies and gentlemen. 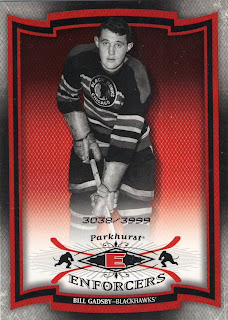 Let me speed things up here..... I'll show you the other nine I got, joy of a completed page style. 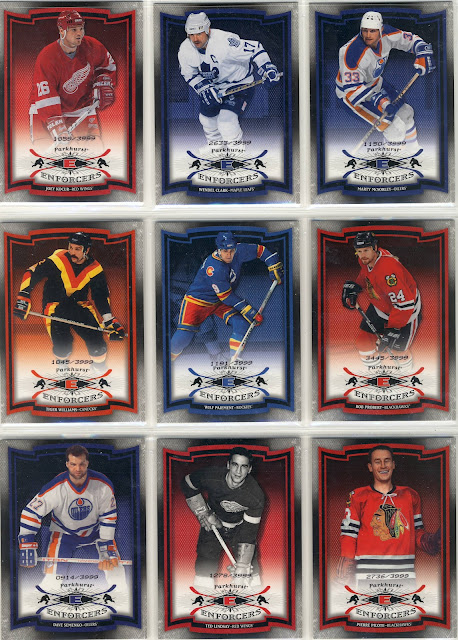 He also had a bunch of the Captains short prints as well... I only picked up one. I was thinking about getting the rest, but the guy next to me got hold of the binder and snagged them all. 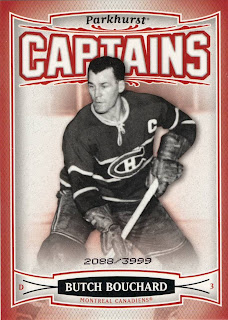 I guess it wasn't meant to be.
Oh, and I also bought this Raphael Diaz Crown Royal blue parallel rookie for $2. I probably paid too much for it, but meh... I like him, so it's okay. 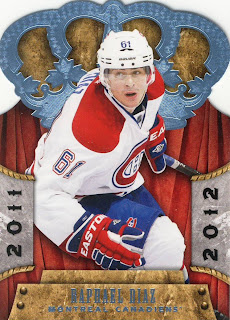 And, as promised.... for those of you came over to see hockey fights, I give you Bob Probert vs. Todd Ewen. Not once, but twice. This was a hard fought game. There was a total of eight fights, including the two you are about to watch.

That's the only time EVER that Probie was knocked out. I remember him losing a couple to guys like Chris Nilan and John Kordic.... but I NEVER saw him knocked out like that.
But you know that if that happened in the first period.... there were still two periods for Probie to get even.
None of this 'quiet room' crap back then. Rub some dirt on it and get back in there!!!

Another one down, waaay more to go.

A wee while ago I wrote a post about getting back to my player collections that I had been ignoring far too long. One of the cards I featured was this Emerald parallel of Lyle Odelein from the 1997-98 Pacific set. 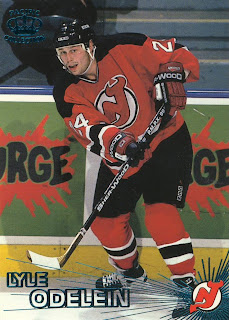 The post wasn't even dry yet when another blogger piped up about having the Ruby parallel version of this card, and that he'd send it right out to me. 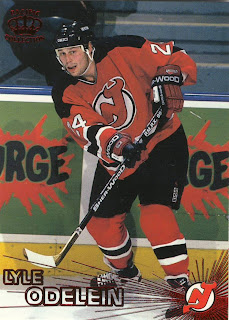 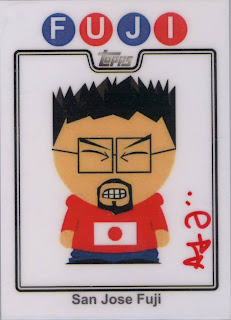 Thanks for the new Odelein Fuji!!!! That's one more parallel off of my list. Of course, I still don't have this base card.... but one thing at a time, right?
Posted by Captain Canuck at 10:02 PM 1 comment:

I'm not ashamed to admit that when I opened my envelope to see who was kind enough to return an autographed picture and I saw this inside.... I let out a Squee and did a little dance. For those of you who know me well, the visual of that in itself is worth the price of admission. 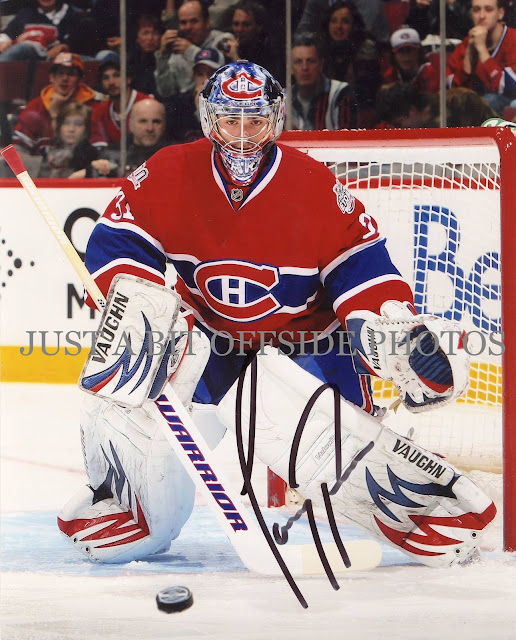 It's no secret that Carey is my favourite current player. Us small town B.C. boys got to stick together.
Carey is well known for being great about signing autographs. It may take a little while, but he signs them all.
I sent this midway through training camp, and received them the last day of January. 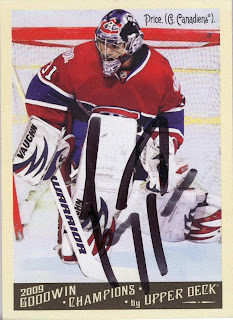 PK add-ons for the PC

I spent $44 at the card show last weekend. The baseball portion of it I've already posted on Waxaholic. I  also added nine Young Guns from the last three seasons for $12. I won't bother showing those.... besides, I've already put them in their respective binders. But I will show you two cards I picked up for the PK PC.
First up, 2011-12 Limited numbered 143/299 Cost- $1 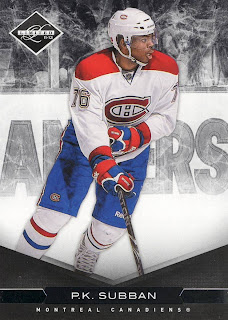 The next card was a bit more than I usually like to spend on one card. And of course, out of the 20 sellers at the show, it was the one guy who refuses to haggle on price.
But I caved and paid $20 for this on card rookie auto from last year's Crown Royal numbered /499 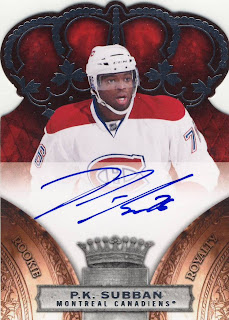 I believe this year's comes out on wednesday.....

The final three cards coming up next post. Or maybe the one after that.....
Posted by Captain Canuck at 6:33 PM 1 comment:

Awhile back my card shop owner handed me some swag. A nice treat to be sure. A couple of oddballs first. Apparently a company named 3D Popz is making............ "cards"?
This Beliveau is about 4"x6" and if you can't tell by the scan, is very bumpity. I guess that's where the 3D comes in. 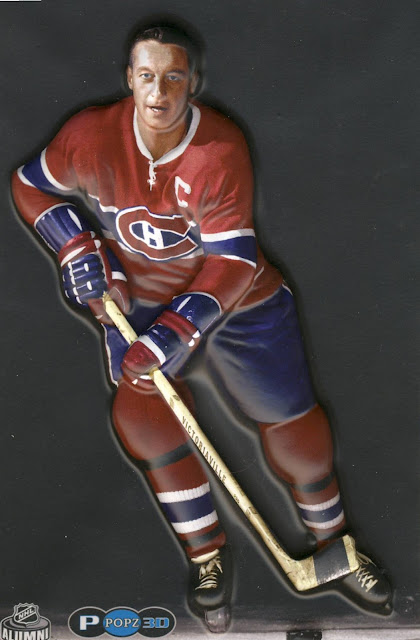 Whereas the Carey Price is only 1"x2"... but again, in full relief and bumpity!

Also included was this foil wrapper. I guess Panini was trying to copy Upper Deck's Hockey Card Day or something.... Not sure how many different cards on who's in the set, but maybe I could pull a Carey Price, or a PK Subban for the PC??? 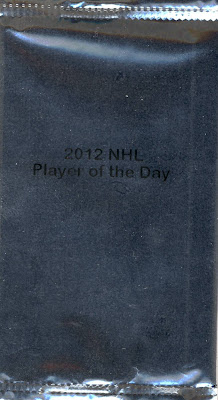 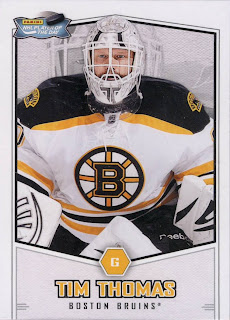 although pulling a Stamkos isn't a bad thing. 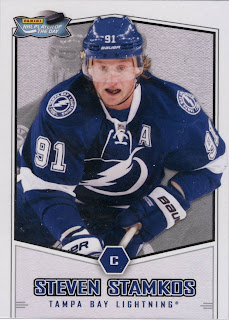 ﻿They were numbered POD 2 and POD 3... maybe I'll find the others one day.
Let's hear it for free stuff!!!!!
BTW, the 2012 version of Upper Deck's National Hockey Card Day is this Saturday. And for the first time, it occurs in both Canada AND the U.S.
Go get your free packs and start swapping!
Posted by Captain Canuck at 9:14 PM 1 comment:

I really have got to knock off some of these through the mail success' I've got piling up in the draft folder.
So today I give you Hall of Fame goalie, Glenn Hall. 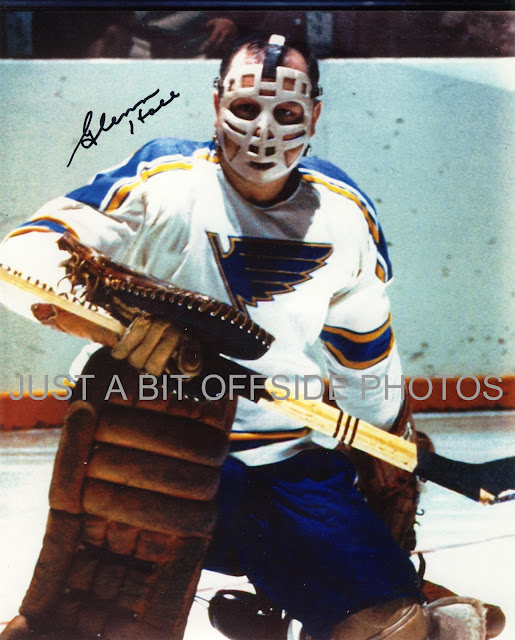 Glenn "Mr Goalie" Hall spent 4 seasons in Detroit before being traded to Chicago where he played for another 10 seasons.
In the 1967 expansion draft, St Louis chose both him and Jacques Plante for their new goalie tandem. Talk about instant success. 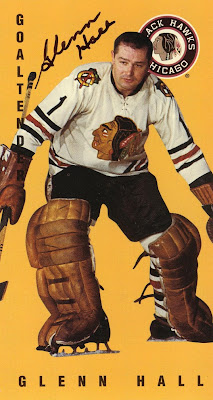 Glenn ended his career with over 400 wins, 84 shutouts, and a 2.49 GAA with one Stanley Cup win. He won rookie of the year in 1956. Over his career he also won three vezina trophies as best goalie.
Glenn is probably best known to the casual fan as the goalie in the photograph of Bobby Orr flying through the air after scoring the 1970 Stanley Cup Winning goal in overtime. You know the one. 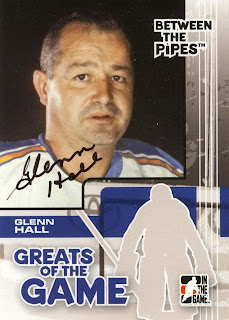 I'm glad to have a success from such a great player.
Posted by Captain Canuck at 12:35 PM 4 comments: