I've really let my player collections slack lately. Too busy chasing sets, or shiny things... you know how it gets. One of my collecting goals for the future is to concentrate more on my player collections.
Case in point, Lyle Odelein.
I hadn't been on ebay for awhile, and found myself on there for a completely different reason. So I decided before signing off to do a quick search for Lyle.
I found a seller who happened to have two cards of his that I needed. I mailed off an offer, and of course he accepted. It wouldn't be much of a post if he didn't accept, now would it?
$3 shipped got me this '97/98 Pacific Emerald Parallel, and..... 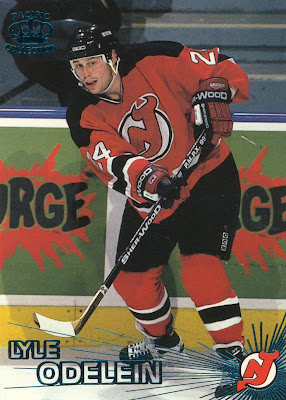 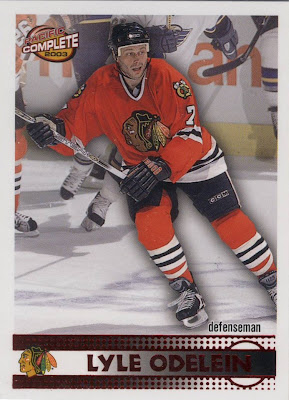 Nice to be able to knock off one of those rare ones.

Of course, with the recent release of ITG's "Enforcers", Lyle's card count just went way up. More for me to chase I guess.

If you have any Lyle Odelein, Chris Nilan, Jim or Joe Watson, Carey Price, or PK Subban cards, send me an email.
Hopefully I can get my player collection want lists up soon to join my set want lists link on the right hand side.
Posted by Captain Canuck at 10:08 PM 1 comment:

"I'm not suspending him" - Peter Chiarelli, Boston Bruins General Manager in regards to Tim Thomas.
First, a bit of background. Today was the day when the Stanley Cup Champion Boston Bruins had their visit with the President of the United States, Barack Obama.
Tim Thomas, starting goalie and Conn Smythe Trophy winner, declined to attend for 'personal reasons.' 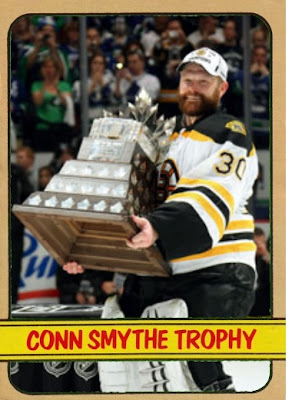 (forgive the 5 minute photoshop)
General Manager Peter Chiarelli had to have a press conference to answer all the questions from the "media" as to whether or not Thomas would be suspended. The answer was no.

My question is this.... has our society fallen into that big of a cesspool that this is news? Suspended???? What did he do that was wrong? What business is it of anyone's why he chose not to attend. Maybe he needs a rest. Maybe his wife is having a baby. Maybe he, like a lot of Americans, disagrees with the direction Obama has taken the country. What does it matter?

There was a lot of talk pointing out that "Thomas was the only player who did not attend." Well, that's not surprising. Thomas is one of only two Americans on the Bruins. (I still love it when the Bruins fans chant USA! USA! when they play the Leafs or Canadiens)
So really, only two Bruins would have any opinion on Mr Obama. All of the Canadians, Fins, Swedes, Russians etc... on the roster would go just for the free food.

Number one, I can't believe I'm sticking up for a Bruin, and number two, I can't believe people make that much of a big deal out of it. The last time I checked, people in the U.S. still had freedom of choice. Unlike the current direction of my beloved country......

Sit back, relax, and focus your conceerns on something that really matters.


EDIT: as I posted this, Tim Thomas released the following statement...

"I believe the Federal government has grown out of control, threatening the Rights, Liberties, and Property of the People," Thomas' statement read. "This is being done at the Executive, Legislative, and Judicial level. This is in direct opposition to the Constitution and the Founding Fathers vision for the Federal government."

"Because I believe this," the statement continued, "today I exercised my right as a Free Citizen, and did not visit the White House. This was not about politics or party, as in my opinion both parties are responsible for the situation we are in as a country. This was about a choice I had to make as an INDIVIDUAL."
Posted by Captain Canuck at 5:16 PM 4 comments:

You all know what it's like... scanner problems, computer problems... the cards pile up on your desk because "you'll just leave them there until you get the scanner fixed and then you'll put them away." Promise.
Yeah.
Eventually, the piles get so big it's like you've built a fort for the cat.
In an effort to catch up, and perhaps more importantly, clean up, I give you these cards from the last card show of 2010........ at least I think that's where they are from....
Nine cards, the first seven out of various dollar boxes.
2008-09 Fleer Ultra Franchise Player Carey Price 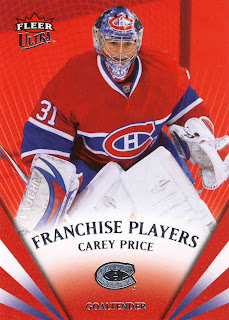 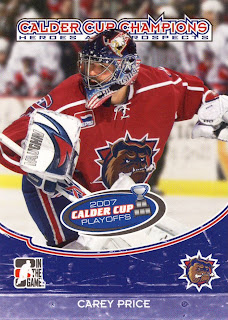 a lot of these dollar cards I could get for 18 cents on Sportlots... but I'm there, so I cave in. Besides, it's more fun, right?

at the rate my team is going, Carey Price may be the only player featured as their "Franchise Player" for the next 10 years. 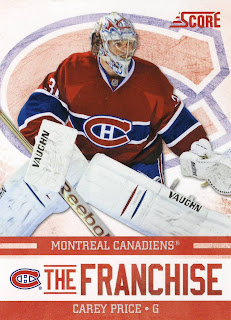 ditto what I said about Franchise applies to these Difference Makers as well. 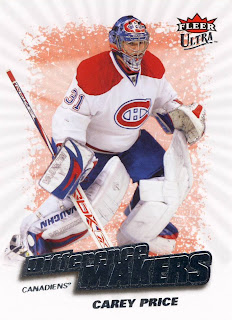 Enogh Carey for now... here we have a card celebrating PK Subban's first goal in the NHL.
Scored against Boston. In Boston. Good times. 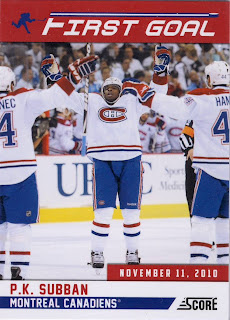 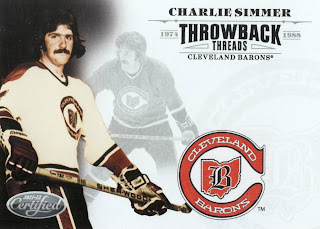 Normally I skip right past the autos in the dollar box. 98% of them are of guys who never made it or I've never heard of or both. This one I stopped at, and bought. Chris is a part time D-Man for Montreal right now, so why not. On card for a buck. 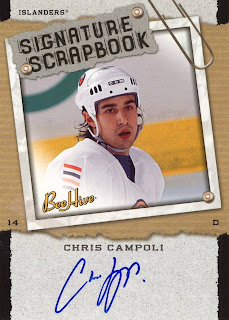 The final two cards cost more then the previous seven combined. But I had to. The first is from ITG's 1972 set.
One of my favourite goalies of all time. Sticker price $5, paid $4. On card Denis Herron auto. 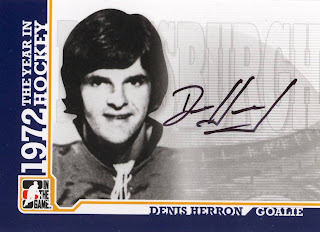 The last card I bought on a whim. There was a new seller at the show. I always like to buy from new sellers. Hopefully they'll keep coming back. Sticker price $10, paid $8. 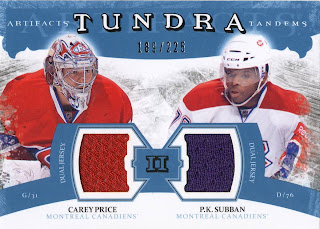 It became my first Subban relic card.
There you have it, thanks for reading, and now I can put these cards away.One less turret for the cat.
Posted by Captain Canuck at 3:48 PM 2 comments:

Ahhh... I may never catch up from my time without a scanner.... (read:slacking)....
In celebration of the fact that the St Louis Blues are in first place overall for the first time this late in the season since....... a horrifically long time, I'll feature a Blue today. Not just any Blue either.

Today's TTM return is from Hall of Famer Brett Hull.
Brett certainly lived up to the expectations of having a famous father... he scored over 80 goals in one season, over 70 three times, over 50 five times and over 40 eight times. Including the vaunted 50 goals in 50 games.

Where did I get this? Why, from Brett Hull of course.
What is it? An 8x10 from his days in St Louis. 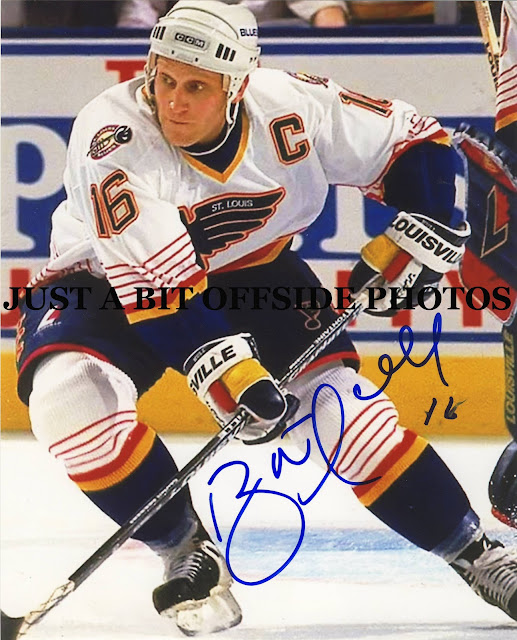 Nice! Although Brett decided to keep the three cards I sent him. If any of you get extras from him, They're Mine!
Thanks Brett!
Posted by Captain Canuck at 1:41 PM 6 comments:

The first card show of the new year took place today. I just happened to pop by. In the time I was there, I caught up with a few people I hadn't seen since before the holidays, spent $29, and brought home some cards.
The kicker is, the cards I took home for myself, cost $5. The rest was spent on cards for other people. I guess I went a little overboard looking for other people's wantlists instead of my own.
Ah well. Why can't Xmas be year round, right?
On the hockey front, I found these.... from the 2011-12 Parkhurst Champions set I'm slowly building.
First up, a colour Rendition card of goalie Rogie Vachon. Cost .50 cents 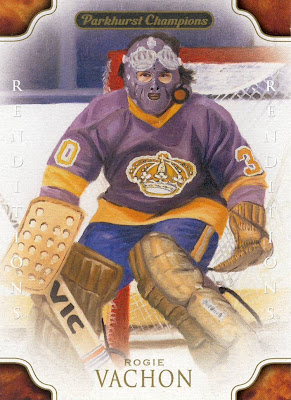 and a black + white Rendition of Phil Esposito. Cost $1.00 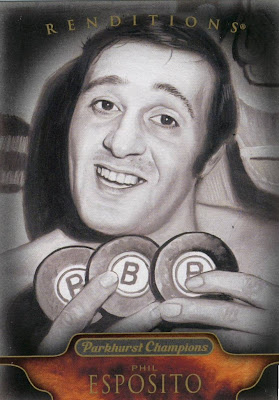 I was very happy to add these two as it now leaves me with only 13 more cards to get to complete the master set. Three wire photos, one colour rendition, four black + white renditions, and five minis.
If you have any to trade or donate, my need list can be found here... LINK
Posted by Captain Canuck at 10:49 PM 1 comment:

Rewind a bit... Canuck gets a new operating system for his computer.... fast forward to today... his computert is faster than ever, things are wonderful, except that new operating system ate everything off of his hard drive, including all scanner software and does not seem to want to talk nicely with any of it's friends. No printer, no scanner, no nothing. I'm amazed the speakers are working.
So there's been no posts at all for awhile, so in the meantime, I give you this.... Lars Eller going off against Winnipeg and scoring 4 goals in a game. His fourth, seen here...

is there a techie in the house?
Posted by Captain Canuck at 10:43 AM 1 comment: