It's been awhile since I posted a ttm success, and they're piling up. Literally. So let's knock one out.

One of my faves growing up, was goalie Gilles Gilbert. The Bruins weren't that annoying yet. And in all of the goalie magazines that I begged my parents to buy when at Safeway always had full colour shots featuring Gilbert in a variety of cool poses.

I really miss those magazines.

Gilles is a gracious ttm signer. He always takes time for his fans. He signed three 8x10's and three cards for me. 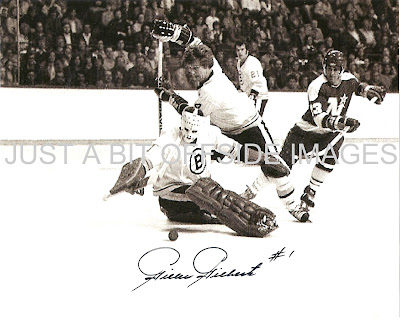 Gilles makes a save with Bobby Orr and Don Marcotte looking on in the background. I think the North Star is Dan Maloney, but I haven't tried figuring it out yet.

According to Gilles' comments in the note he sent, he saved this shot and it went wide. 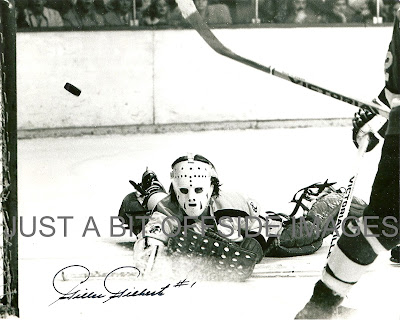 These shots are all from early in his career before he started adding stars to his mask. If you love goalie masks, you know what I'm talking about. 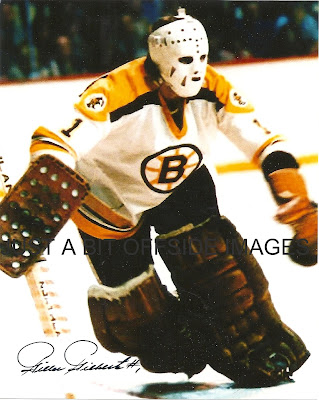 When my wife saw these, she exclaimed what a perfect signature he has, and she's right. 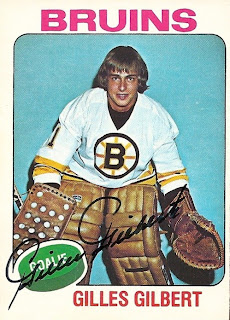 Apparently the crowd was late arriving for this one... 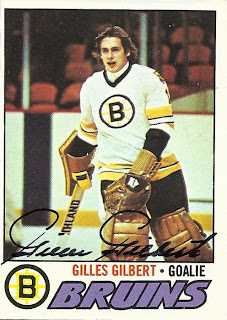 After a brief start in Minnesota, Gilles spent most of his career as a starter in Boston. The final two years were spent in Detroit. Not the Detroit you all know now..... the Detroit from the 70's and 80's... those two years did not do any favours to Gilles' career numbers. 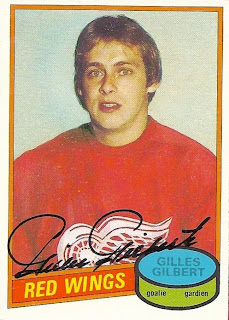 Thanks Gilles!
Posted by Captain Canuck at 5:43 PM 4 comments:

As the title suggests, the 2013 class of the Hockey Hall of Fame was announced today. Rules mandate a maximum of four players and one person from the builders category may go in.
And that's just what we have.
First, we have the lock of the year.... Chris Chelios.
This former Atlanta Thrasher great won 3 Stanley Cups, 3 Norris Trophies as best defenceman, and made 11 All Star teams in 26 seasons.
Chris becomes the oldest member ever inducted into the Hall on his first year of eligibility. He is 51 years old. Yeah... he last played at 48 years of age.
RC - 1984-85 OPC 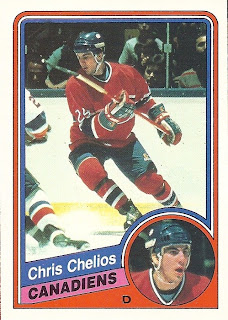 Next, another defenceman, Scott Niedermayer.

Scott won 4 Stanley Cups, 1 Norris Trophy and 1 Conn Smythe trophy as playoff MVP. He was named to 5 All Star games in his 18 seasons. 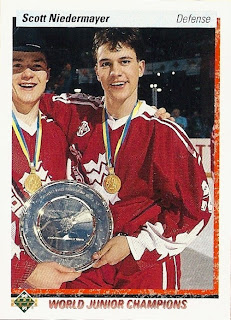 Here's one that had me puzzled... I really didn't think he was that good or deserving... but, I really didn't see him play that much in his prime.
Brendan Shanahan played 21 seasons in the NHL, winning 3 Stanley Cups and being named to 3 All Star games. No individual hardware. Never led the league in any category except for one year where he had the most shots. Meh. I'm sure he'll go in as a Whaler. 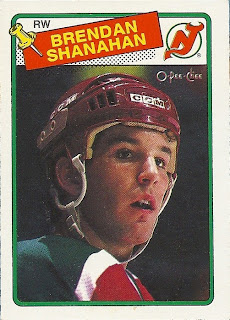 I figured Danielle Goyette for this spot, and I was close. Her teammate, Geraldine Heaney.
Geraldine was one of the pioneers of women's hockey. Joining Team Canada in 1990, the first year for organized women's hockey, she won 7 World Championships, Olympic silver and gold medals while being named top defenceman three times.

and in the builders category, we have former coach, Fred Shero. Not many people know Fred played 145 NHL games for the Rangers in the late '40's. He's more known as a coach. Specifically for the Broad Street Bullies of the '70's.
Jack won 2 Stanley Cups and 1 Jack Adams trophy as best coach in 10 seasons.
Fred passed away in November of 1990. 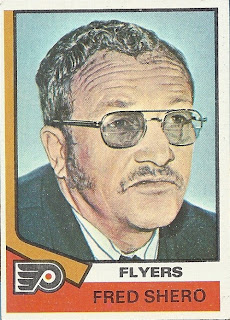 There you have the 2013 Hockey Hall of Fame class.... and once again.... no mention of anyone from the WHA.
Curious.
Posted by Captain Canuck at 4:32 PM 2 comments: