New Dallas Stars goalie Kari Lehtonen has decide to pay homage to his new surroundings... and I like the way he chose to do it. 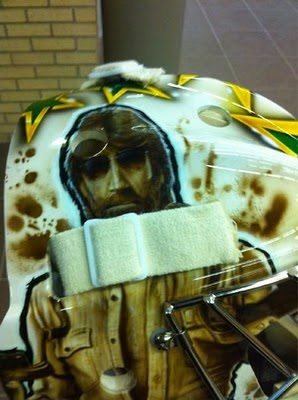 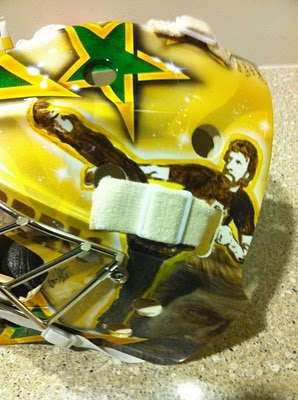 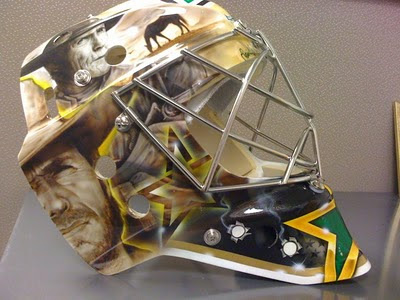 I hope the PA announcer, before every penalty shot or shootout attempt plays, 'Do ya feel lucky? Well punk, do ya?'
Awesome.
Posted by Captain Canuck at 7:34 PM 1 comment:

Hockey Fantasy League... who's in?

It's that time again... when a young man's fancy turns to hockey. (or a young woman's...) Anyways, that means it's time for Just A Bit Offside's First Annual Hockey Fantasy League. 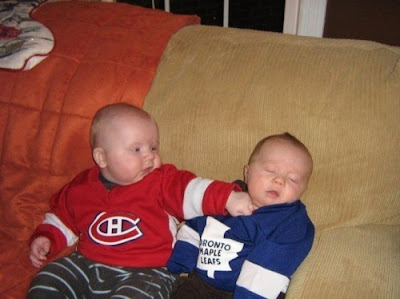 (and knowing stuff about hockey is not a requirement. Anybody is welcome, it's all about the fun...)
Posted by Captain Canuck at 12:25 PM 8 comments:

For those of you have been reading﻿ my box / pack breaks over on Waxaholic, you know I've been trying (unsuccessfully) to pull a rookie card of P.K. Subban. I bought an entire box. No joy. I've bought half a box in loose packs... nope. My wife has brought home 3 rack packs from Wally World. Less than zero. So I decided I've spent enough money for now, I'll just make my own.
A 1971/72 OPC P.K. Subban. 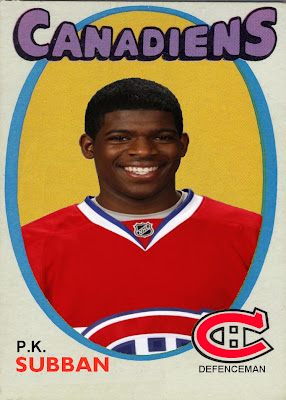 I'm not quite sure how someone with, shall we say, that deep of tan, would have been recieved in Montreal, and the NHL in 1971, but all I know is I haven't seen anyone carry the puck up ice that well since Guy Lapointe. So he's on my team.

And if anyone has managed to pull a Subban, could you throw him my way? Gracias.
Posted by Captain Canuck at 5:35 PM 3 comments:

Since the dawn of time, card manufacturers have been cheap and lazy. You know it. I know it. They know it. Back in the day, film was expensive. not to mention paying the dude taking the shots. So they decided to be pro-active and recycle. You had no idea card manufacturers were so pro environment, did you? (Let's not mention renting barges to carry out thousands of unwanted cards to be dumped in the ocean. We'll consider that a man-made reef)
Anyways, Topps and OPC have been re-using images for ages. Even when the image in question no longer had anything to do with the subject.
Case in point. The year is 1976. The NHL is in minor disarray as a few teams change cities, names, players, etc... 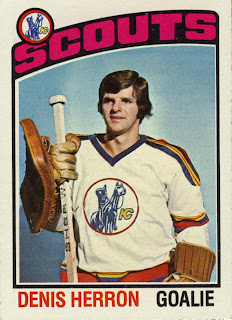 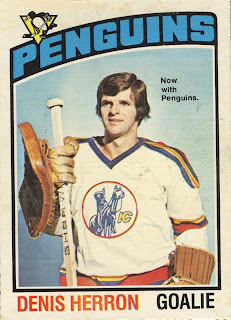 The Topps version on the left shows us that there is nothing to see here, everything is A-Okay. Denis Herron still plays for the Kansas City Scouts. OPC, Topps' Canadian brother, knows that will never fly for the all knowing hockey connoisseur that we all are right out of the womb. So OPC gives us his new team name, logo, and a small blurb explaining why the uniform does not match the information given. They do not, however, give us a new picture of Denis. Nor do they alter the old one. Sometimes simple is best.

While helpful, this does not tell us the whole truth. There is no team in Kansas City anymore. The Scouts have relocated to Colorado and become the Rockies. Again, the Topps card on the left makes no mention of this. They would have you believe everything is kosher in the land of ice and rubber. 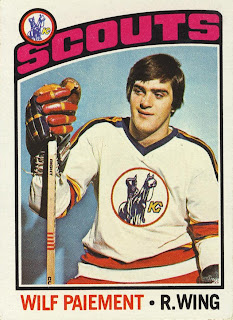 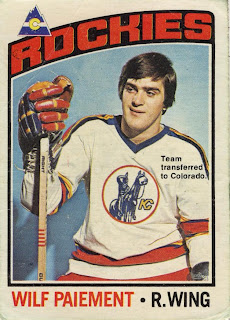 OPC gives  you the lowdown. Yes, Virginia, there are no more Scouts. See? Everything you need to know right there on the front of the card. 'Team transferred to Colorado' and they are the Rockies. Sometimes simple is best.
But just when you think you know what's going on... just when you think you've seen it all, they go and do something like this. 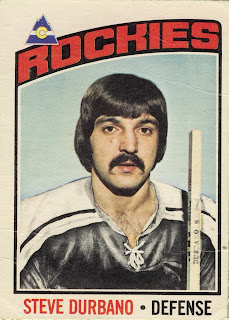 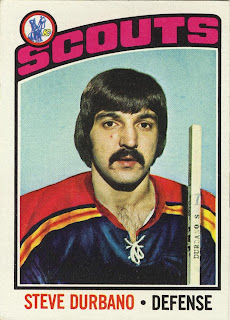 ﻿Take a look at what Topps has done to Steve on the left here. Now the Scouts are no more, but they want to continue the charade as long as possible. So they airbrush him (rather badly, I might say) into a Scouts road uniform. Even though Steve has played for Kansas City for the last two years. Where did they dig up this photo??? Recycle they say.
So what does OPC do? Well they put him with a Rockies name and logo, but do not tell you that the team transfered there, and airbrush him into a..... a..... well, I have no idea what uniform that is supposed to be, but it sure ain't Colorado.
There be strange goings on in the card world. Tune in next time for the 76/77 version of the Oakland Seals. California Seals. California Golden Seals. Cleveland Barons.
Yeah, it gets a wee complicated.
Posted by Captain Canuck at 4:04 PM 5 comments:

Some of you may know me from my other blog, Waxaholic. Some of you may be new readers. Regardless, I say Welcome. I've been wanting to do another blog for awhile now. Waxaholic is overloaded with topics. I need to streamline a wee bit. So with that thought in mind, Just A Bit Offside was born.

On this blog I'll mainly focus on my first love. (no, not Vicki from 1st grade) I mean hockey, and of course, hockey cards. As is usual with me, I'll stray a bit now and then, but I'll try to keep an even keel.

So sit back, relax, hit the follow button if you'd like, and I'll deliver my usual array of charm and wit right to your inbox/rss reader/ dashboard/ thingamajig...... at no cost to you. Free. Gratis.

What a deal!
Posted by Captain Canuck at 3:09 PM 5 comments: