A What the Hell Newsflash.....

This just in...... the Blue Jackets are desperate, and the Flyers and Kings have both lost their minds.....

In three seperate deals today, the Philadelphia Flyers have completely changed the look and feel of their team, and confused the hell out of their fans.

First, they traded star center Jeff Carter to the Columbus Blue Jackets for winger Jakub Voracek, a 1st round pick this year (8th overall) and a third round pick.

Then, they traded their Captain, center Mike Richards, for winger Wayne Simmonds , minor leaguer Brayden Schenn, and a 2nd round pick.

Here's my take.... Columbus is desperate to sell tickets, needed to make a splash and get a big name in the building, AND add a star center to compliment their superstar winger Rick Nash.
So they overpaid for Carter.  Okay... I get it. I hope it works out for them... if not, Quebec will like having them in two years.

LA has lost their minds trading Schenn and Simmonds for an undersized Richards who has NINE years and 52 million left on his contract.

And Philly, so close to winning it all went after their chosen goalie of the present, 31 year old Bryzgalov, but to get him had to trade away their present goal scorers for future youngin's.
They now don't have the punch up the middle or the goal scoring to compete now, but by the time the youngin's are ready, Bryzgalov will be too old and replaced by Bobrovsky. So what did they gain?

I like all the acquisitions... but I thought they wanted to win now?

I'm not too sure about the sports pages down in the U.S, but here in Canada it's all hockey all the time. Even more now that the actual games are over with. It seems like reporters journalists like talking more about what could be, and not actually what happened. This unfortunaltely is the truth, as most fans are the same way. Tune into any message borad and you'll be inundated with not so juvenile delinquents talking about how the Leafs just have to trade Clarke McArthur, JS Giguere and their two first rounders to Pittsburgh for Sidney Crosby. Of course the Penguins would do it because they're afraid of him not coming back from injury.
But I digress. Where was I? Oh yes... The sportspages. I have read countless (Okay, maybe a dozen) columns on how the cash strapped Lightning may not sign restricted free agent Steven Stamkos before the July 1 deadline.
What??!!!??! Give your head a shake you idiots. Where did you go to school let alone get your sources?

I don't care if you have to sell a kidney or three.... Tampa will not let Stamkos go to another team. Last time I checked, Guy Boucher, Steve Yzerman, and the new Tampa owners still had a pulse. And there ain't no one that dumb to let a guy like Stamkos go. Not even Brian Burke. He'd just trade him to Boston.

The NHL draft and Free Agency... the best time of year for any hockey fan.... gotta love it. Now if only Montreal would trade Lars Eller and their first rounder to Nashville for Shea Weber and cash.......
Posted by Captain Canuck at 2:59 PM 2 comments:

Today's ttm success is from the legend, Terrible Ted Lindsay. All 5'8" 160 lbs of him. Ted won four Stanley Cups and played in 11 All Star Games before being elected to the Hockey Hall of Fame in 1966.
Ted was kind enough to sign three photos...
I fyou haven't heard of Ted Lindsay, or don't know a lot about him, I encourage you to read up on him. He was a lot more than just a hockey player, paving the way for the player's union, among other things. Due to his rough style of play, the NHL instituted penalties for 'elbowing' and 'kneeing'....
Wiki link.
Ted aslo signed three cards for me...


After his playing career, Ted started the Ted Lindsay Foundation, dedicated to curing Autism. Please visit his website HERE, and if you are fortunate to have a little extra, I would encourage you to consider giving to his cause. Thanks for looking.
Posted by Captain Canuck at 11:35 AM No comments: 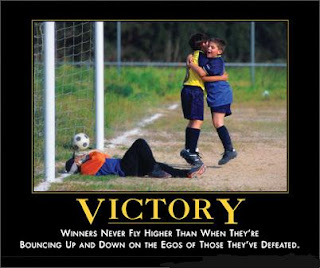 Only Casey picked the right team to win the Cup, but that wasn't enough to catch Fuji who had an outstanding first round.
Thanks to all that participated... and Fuji, if you can send me your address so I can double check I have the right one, I'll send your prize out just as soon as the postal strike is over....
Posted by Captain Canuck at 9:34 AM 6 comments:

The Joy of a Completed Page... Retro Style.

So if you've been reading my stuff for awhile, you know I like the retro hockey stuff. Every year, OPC puts in a retro parallel set with the regular base cards. Two years ago was an epic set. Make that Epic. Capital 'E'. Last year was, meh. A nice design of a card, but not super collectible. This year was a huge hit! Well, with me anyways... not a lot of other people liked it. But I love it. Love it!
While I'm trying to build the set, or buy one (that's another story in itself) I decided to also try and do a Master team set of Montreal. The retro parallel, the rainbow retro parallel, and the black border rainbow retro parallel. The black bordered are numbered /100.
Difficult yes, but not impossible. Or so I thought.
Anyways... I finished my first page the other day. 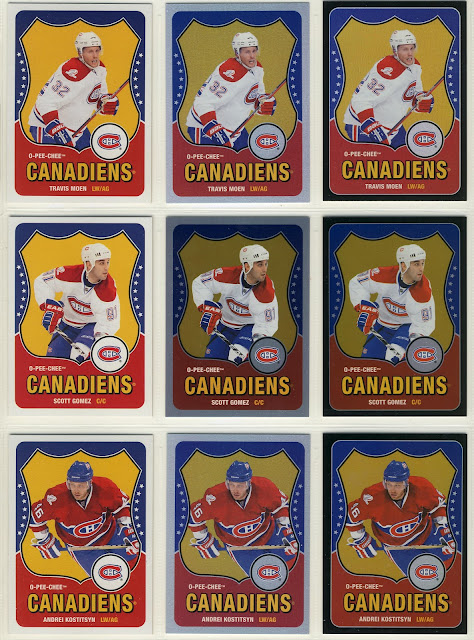 There are 24 different cards for the Montreal team set, meaning I need 72 cards to finish the master team set.
I'm currently sitting at 48/72
Only 24 to go.

If anyone can help.... with either the Montreal master team set, or the regular opc retro set, drop me a line...
Posted by Captain Canuck at 3:43 PM 1 comment:

Guy was kind enough to sign three cards for me... 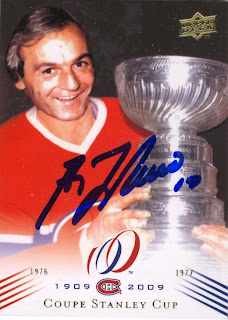 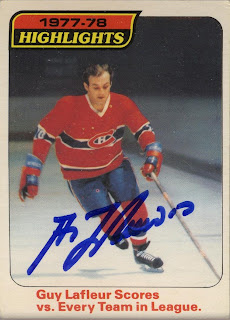 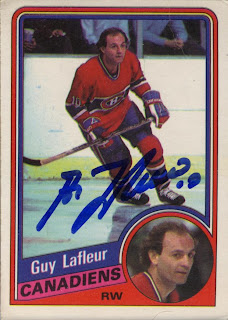 and three photos.... I'm rather fussy when I pick out what photos to send to people. Let's have some fun with these.... Here we see Guy attempting to score with at least four Cleveland Barons behind him. That's not good news for either Gilles Meloche or Gary Edwards, whichever baron goalie played this game. How did I know that? Let's look further.... 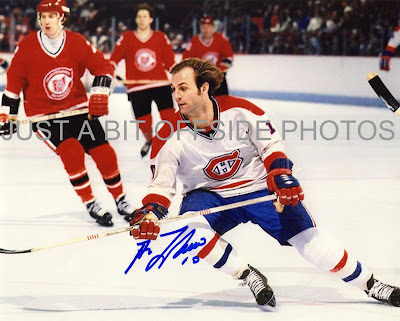 The Barons played two full seasons in the NHL, 1976/77 and 1977/78. This picture is from 1977/78. The Barons had a slight uniform change that year, as did Montreal, the only uniform change Montreal did in 30 seasons. This photos was taken at one of two games that season. December 27th, 1977 (a Habs 5-3 win) or February 23rd, 1978 (another Montreal win 5-1). Those are the only two home games Montreal had against Cleveland that season. Unfortunately, box scores are not easily available for that season. That also tells me that the hapless Baron player behind Lafleur is none other than the infamous defenceman, John Baby. No, I did not make that up. 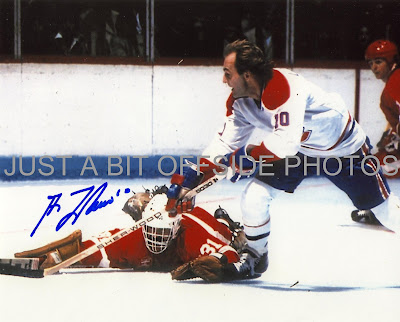 Bob spent his first 6 1/2 seasons with the Buffalo Sabres before being traded to Detroit on December 2, 1981. The only road game Detroit had at Montreal that season after that trade was on January 30th, 1982. Bob re-signed with Buffalo after that 1981/82 season. Montreal won the game 5-3. Again, no box score to tell me if Guy scored here... but I think it's safe to say. But who is in the background??
Here's where it gets good. In the '81/82 season, more players started to wear helmets. But only four players still wore the old "Toilet Bowl" style seen on the background player. One was Lanny McDonald, but he never played for Detroit. The other three? All played for Detroit! And were all on the roster for this game in 1982!!! What are the chances? Am I too excited over this?? Anyways, It's not Mike Foligno, nor Dale McCourt, so that leaves Mr George Lyle! Come on down!

The last pic is just a great portrait shot... 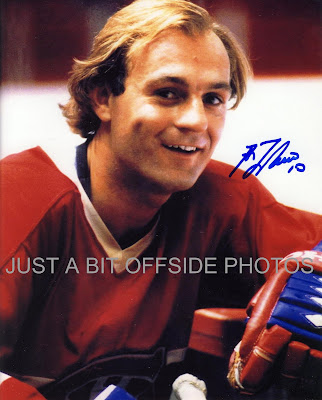 Guy has just eliminated your team in overtime, slept with your girlfriend, and smoked a cigarette.

The last trade night at Maple Leaf Sports was a huge success. I've been going to these trade nights once a month for well over a year now and they're always a load of fun. There's a great bunch of people that attend. But as for trading... I usually don't get a lot done. There aren't too many set collectors out there swapping base cards if you know what I mean.
However, this time I was able to play with the big kids. As I was just about to leave, yet another round of pack wars broke out. So I stuck around to watch. Good thing. Another collector came in with a trade box and an 8x10 photo on top. I asked what the photo was, and it turned out to be an auto'd Larry Robinson from the card show the week before. He ended up with two and wanted to trade one.
Boo-yeah!
He started looking through my trade box and pulled out quite a stack of cards. Three or four autos, a few inserts, and a sweet rookie four colour patch card #/15. He turned to me and said that he really wanted all of those cards, would I mind looking at his traders to see if there was more I wanted.... 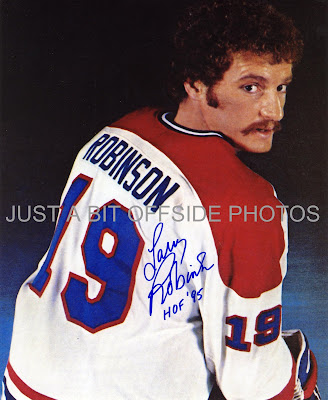 I came out with these. 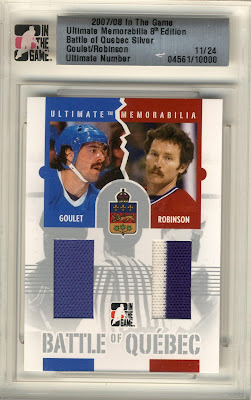 and another Carey Price auto for my collection. 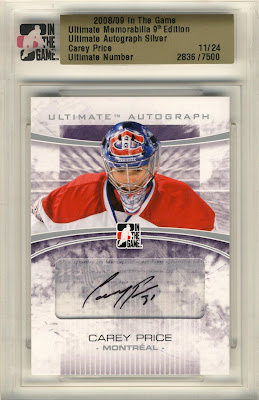 This one is die cut! Another slabbed Ultimate thingie #/24....

Everyone was happy, and no one mentioned a book or any price found in one.

And in another unbelievable shocker.... I managed to get this trade post up before the next trade night happened. How about that.
Posted by Captain Canuck at 9:19 PM 2 comments: