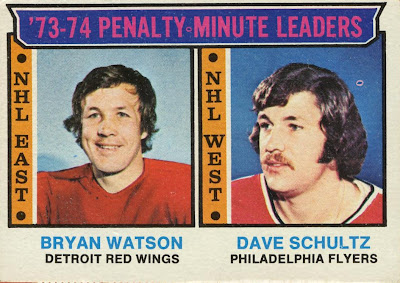 The 5th of six leader cards to start us off sees us get to the nitty gritty. It was a different game in the '70's. Guys like Gretzky and Crosby would not have made it in this league. All your top point getters could all take care of themselves. I guess that's why Dave Semenko had such a long career.
Moving on... Bryan Watson changed teams 9 times between 6 different teams through a 16 year career. His 255 penalty minutes in '73/74 was actually split between three teams. Pittsburgh, St Louis and Detroit.(pictured) In his 21 games with Detroit, Bryan racked up 99 minutes in penalties. Not bad.
Dave Schultz's 348 minutes was a mere warmup for his '74/75 season in which he accumulated 472 penalty minutes. A record that still stands today. I think he could have done better in '73/74, but he wasted so much effort in scoring 20 goals. In his record year, he only potted 9 goals. Priorities kids. Make a list if you need to. 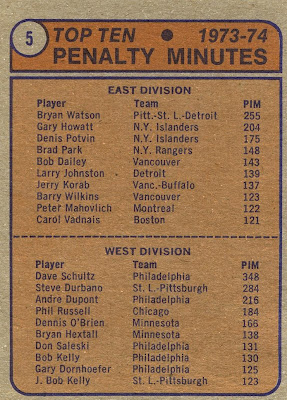 For the first time in what I can remember, I see a list from 1970's hockey with a player on it that I had no clue existed. Barry Wilkins of Vancouver, come on down.
Let's see a little '70's hockey to calm the nerves, eh?
Posted by Captain Canuck at 12:47 PM