In life, we use the word 'hate' a lot. Probably too much. And rarely do we mean it. Or at least, do I mean it. I've tried to cut down, as there really are very few things I hate. Fish, wet socks, the Bruins.... maybe a couple of other things.
But when I was younger, I threw the word 'hate' around with fervor. Athletes from the wrong team were a frequent brunt of my wrath. One such receipient was today's post subject. Andy Moog. In the 1981 playoffs, a rookie netminder whom no one had ever heard of before, knocked out the four time defending Stanley Cup Champions Montreal Canadiens in three straight games.
My 10 year old self was not amused.
What's worse was that the games weren't on tv to us folks in northern British Columbia... so I didn't even get to see it to know it was real or to understand just how this could have happened.
Mr Andy Moog was the subject of a lot of 10 year old cursing on the playground for weeks to follow.
Of course, the team he was playing for was the Edmonton Oilers. Fast forward in his career and he now plays for.... wait for it.... the Bruins. Great Horny Toads. From the Oilers to the Bruins! Why don't you just kick my dog while you're at it.
Anyways... you get where I'm at with regards to Mr Moog. Years pass, stuff happens, and I lose my game for a few season's. When I come back I start to hear rumours. Ugly rumours. My team entered a dark era. An era that shall not be named. It seemed that anyone was allowed to wear the beloved bleu blanc et rouge. Names like Linden, and Gilmour, and.... and.... Moog.
WHAT??!?! Say it's not true.... Pics or it didn't happen!
damn. 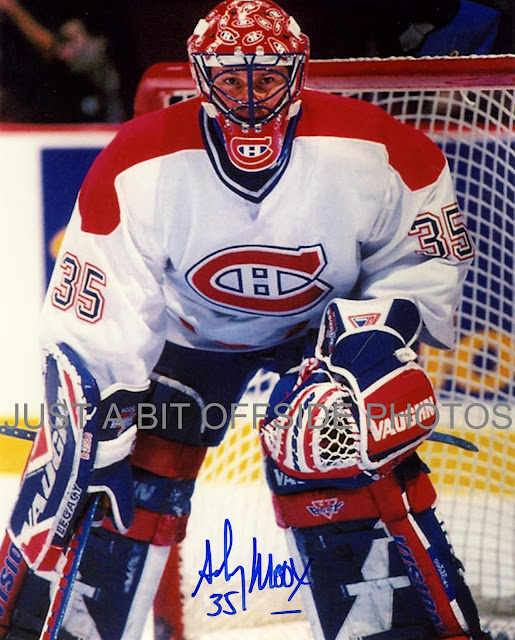 Turns out, Andy played his final season in the NHL with Montreal. This is where you hear the Price is Right fail music.
Anyways... over the last few years I've come to terms with it. Almost. So of course in my letter to Andy, I was completely honest with him. But I also told him that once you wore the sweater, you were a Hab for life. All other affiliations were null and void. I welcomed him to the family.
He responded by sending me all this stuff signed. 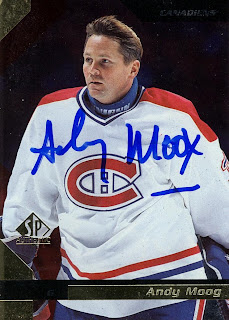 These are from the 'dark period' of his career..... 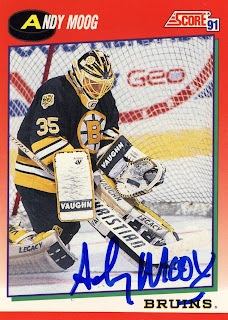 Finally one of the ugliest third jersey's ever.... if it wasn't for the Islanders continued fails throughout the years, the Bruins 3rd jerseys would be the laughingstock... but it is a good shot of his Bear mask. 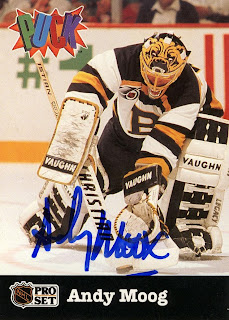 Interesting card there... I love food insert cards. I wish they still did that.

Well, that's it... Welcome to the family Andy. Don't worry about your past. It's how you finish life that counts, not all of your earlier mistakes.
And thanks for the sigs. No hard feelings.
Posted by Captain Canuck at 11:49 PM