Perhaps the best ever.... 1956 Montreal Canadiens

This is the last in the three part series of my card show team photo buying spree. Today's shows the Publicity shot given out to celebrate the 1956-57 Montreal Canadiens. It's printed on a higher quality newsprint that has a bit of stiffness to it. (and my scanner nicely cut off the left side border) 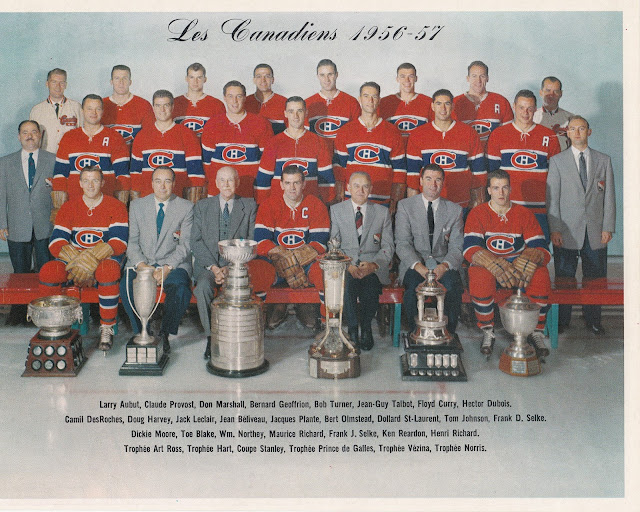 This is the team that in the 1955-56 season, went 45-15-10 on their way to the first of five consecutive Stanley Cup Championships. A record that still stands today.

The Hardware. (from left to right)

New for 56/57
That's Maurice Richard front and center wearing the Captain's "C" on his sweater after the retirement of former captain, Butch Bouchard.

Fun Facts
William Northey, old dude behind the Stanley Cup, was responsible for two rules changes still in effect today.
He pressured the NHL to switch from two, thirty minute halves, to three, twenty minute periods.
He also was responsible for the removal of the "Rover" position, cutting the number of players on the ice for each team to six.
Can you imagine another player for each team skating around out there? Lunacy.

There are thirteen Hall of Famers in that picture. Thirteen. On one team. Wow.

Posted by Captain Canuck at 5:10 PM