The WHA, or World Hockey Association began with the 1972-73 season with twelve teams. One of them being the Los Angeles Sharks.
The Sharks would play two seasons in L.A. before moving to Detroit for the 74/75 season as the Michigan Stags. Unable to compete with the Red Wings, they once again moved, this time mid season on January 18, 1975 to Baltimore to play as the Blades.
They franchise would fold at the end of the season.

But at the very beginning, not unlike every Maple Leaf season, the franchise was full of hope. Excitement.
Look at these happy, smiling faces. 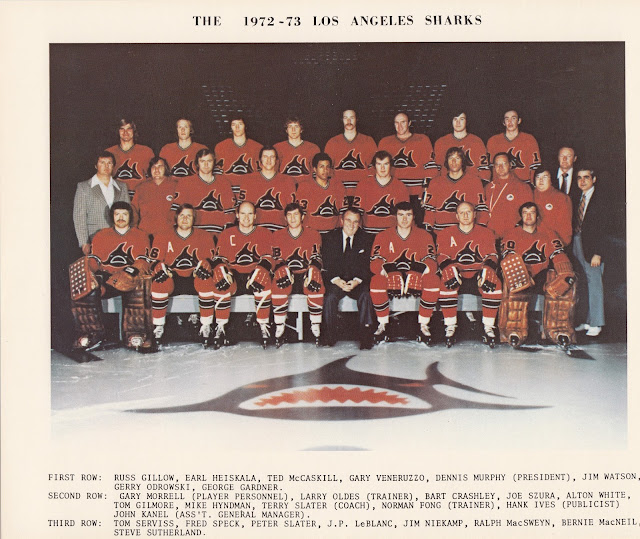 What we have here is an original 8x10 Los Angeles Sharks team press photo. My scanner cut off a bit on the right side, but all the info is there.

I picked up this little beauty at our annual gimungo card show last weekend. Okay, it wasn't THAT gimungo, but everything is relevant.
I oogled it all weekend, and at the close of the show late Sunday, I pounced.
Okay, not so much as pounced as pleaded for a better price. But it worked. (obviously)

Keeping the WHA history alive... one little bit at a time.