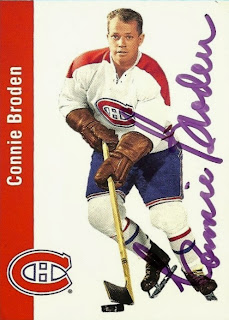 Did you know Connie Broden is the only person to ever win the World Championships and the Stanley Cup in the same year?
Did you know that he won two Stanley Cups despite only playing 13 games?

This is Connie's only card ever issued. I finally managed to track down two copies and send them off to Mr Broden to be signed last year.

If you'd like to take two minutes and read about him and his career, including some great quotes, please go HERE . It's well worth it and far more eloquent than I could ever be.