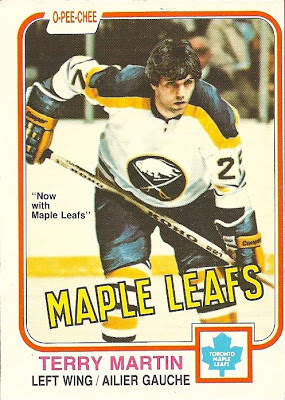 Terry broke in with the Sabres in the 1975/76 season. His rookie card is #318 of the 1977/78 OPC set.
Terry was selected by Quebec from Buffalo in the 1979 expansion draft. After a brief stay he was traded to Toronto with Dave Farrish for Reg Thomas. Terry stayed with the Leafs until 1984 when he was taken in the waiver draft by Edmonton.

I'm assuming that because OPC never included him for two years, they didn't have rights to any photos of him, so they had to use an old image when they all of a sudden decided to insert him into their set once more.
Posted by Captain Canuck at 9:43 PM