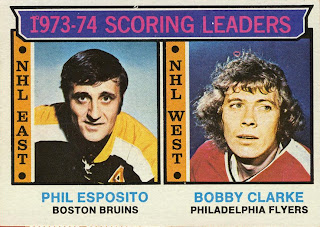 Okay. Last leader card featuring a Bruin for awhile. I promise. What's there to say other than the Bruins of the early '70's were a juggernaut. No team has dominated the scoring charts since like they did.

For my take on Phil, go HERE and read the post for card #1 in this set. For now, we'll concentrate on Bobby Clark.
Bobby was the captain for the Philadelphia Flyers, and at the time this card came out was just about to lead the Flyers in back to back Stanley Cup wins. Bobby went on to lead the NHL in assists in the 74/75 and 75/76 seasons. As well as playing in two of his 8 All Star games. 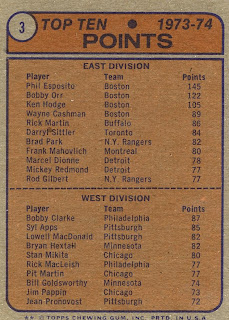 it's nice to see a picture of Bobby with all his teeth. A rarity for sure.