I haven't been adding too much to the old hockey portfolio since I bought two boxes of the brand new OPC.
I'm nearing completion of that set, and slowly working on the retro set. If you have any swaps, let me know.
But I have managed to make two trades in the last month or so... trade nights have really ground to a halt lately. There was a discussion last week between 5 or 6 of us where the consensus was the only reason we even bother showing up anymore was to catch up with one another, and maybe bust a few packs. Trading, for all intents and purposes, was dead.
That said, I still ended up with two cards. Both from the recently released UD Trilogy. Seems to be a popular set among the cool kids.
First, a triple game/event used jersey card. I'm assuming game used for Koivu and Eller, event for the rookie Galchenyuk. I gave up an insert of Nail Yakupov from this year's Score set for it. 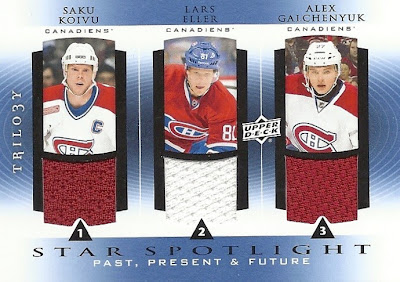 Next was a pickup of rookie of the year runner up, Brendan Gallagher. 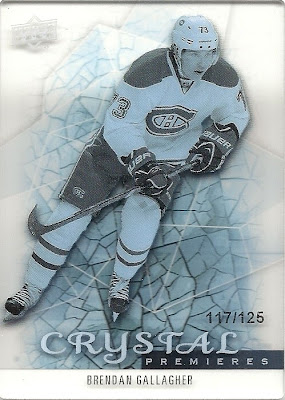 These Crystal cards are of course see through, and very thick. I hadn't even seen one before this one. Going the other way was a TJ Oshie 2011 Limited /5 and a dual Curtis Joseph jersey card.

I also saw a Galchenyuk Crystal /99.... but I didn't have enough ammo to obtain it.

These two fit nicely into my home, and I hope to find more Crystal cards.... they look pretty cool. But if not, I'll just keep plugging along on my OPC set.
Posted by Captain Canuck at 11:53 PM