Last week, or maybe the week before, I bought a couple of jumbo packs of the new 2013-14 Score Hockey release.
I was going to scan and review them, but then I realized that it was SCORE AND NO ONE GIVES A HOOT.
So I filed the cards away and forgot about them.
But today is the day.... the 2013-14 OPC hockey came out today!!!!! Woot WOOT!

Before we dive in and take a look see at what Santa brought us in August... I'd like to take a second to talk about numbers.
No, I wasn't just sponsored by Sesame Street. (but seriously, how cool would that be???) I'm a numbers guy. Out of my 8 courses my senior year, 3 were maths and 4 were sciences. That continued into college.
I can do most math in my head. It just comes naturally. I'm no Charlie Epps, don't get me wrong... but I can't understand how some people can't do any math, let alone complex stuff in their head.
But I can't do a cartwheel either, so what do I know?

You may be wondering where the heck I'm going with this... bear with me... I'm a numbers guy, not a writer.
As a child, watching the game, or reading the backs of my hockey cards for hours... stats were my thing. I poured over them... memorized them. I'd follow the league stats in The Hockey News. Remember when they used to have PAGES of stats in The Hockey News?
As a result... I can look at tables, charts, reports, and the information I want just floats off of the page and I can extrapolate from there.
One of the things that pops out to me that others may or may not see is patterns. Remember those questions? "What is the next three numbers in this sequence? 17, 95, 563, ..., ..., ...

I lived for those.

All over it like a fat kid on a smartie.

But back to patterns... there was a definite pattern I observed while opening this box. And it didn't take a Mensa candidate to see it either. I can only assume Upper Deck sold their computers and bought Macs or something... follow me on this...

But first, the box. Here's the top. Patrick Kane is our fashion model for the season. 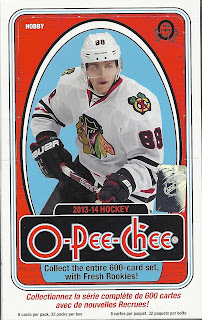 32 packs, 8 cards per pack.
And here's the bottom. I have no idea why all card companies don't do this... it should be mandatory. It's not like it'd cost any more.... anyways. I like seeing cards on the box. I believe there are 4 different box bottoms to chase. 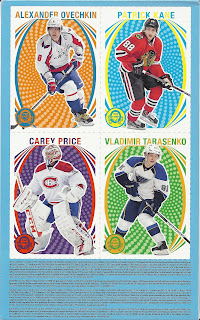 the wrapper, remarkably similar to the box. 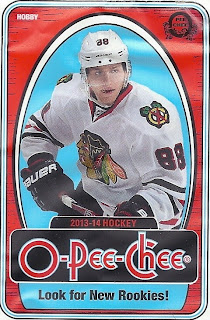 Here are the base cards.... I scanned five of them as there are 5 different colour schemes.

Cards #1-100 are represented by the Mule, Johan Franzen.
Colours - Light Blue and Red 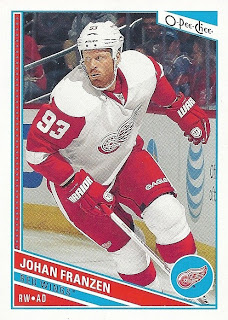 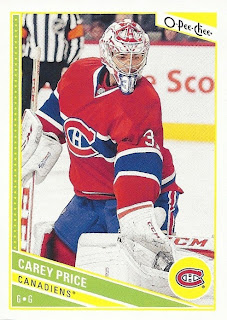 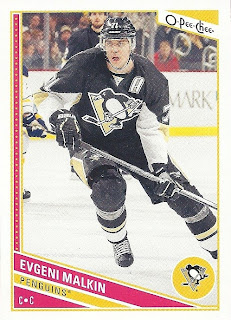 Cards 301-400 Say hi to Wayne Gretzky. Wayne Gretzky??? I guess there are legends in the base set... not sure how many. Less than 50 though... at least it's a new pic of Wayne. From fairly early in his career judging by the Titan.
Colours - Orange and Green 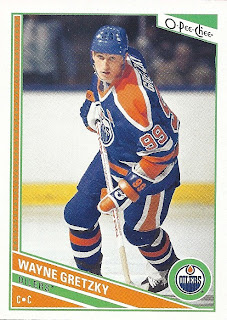 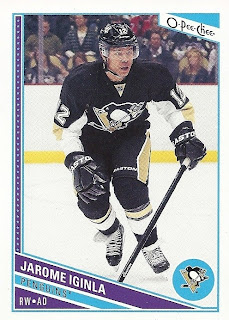 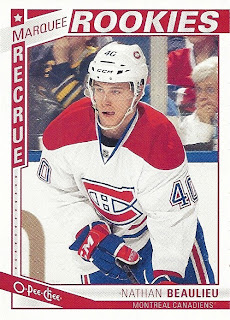 Notes: There should be 16 SP rookies per box, I only got 15.
I guess I should show the backs of these suckers.... fairly straightforward. Number top left as it should be, vital statistics, and playing stats. Everything you need on the back. Well done. 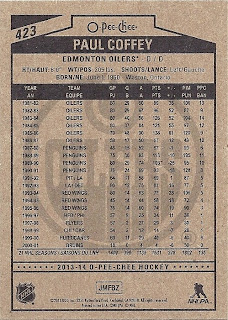 The retro parallel is back this year.....

When I opened a loose pack at the store and got to the one per pack retro, the LCS owner started singing Jimi Hendrix' Purple Haze.... 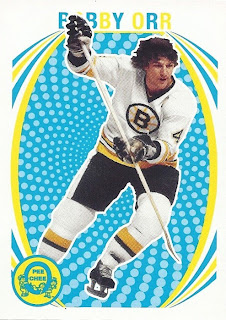 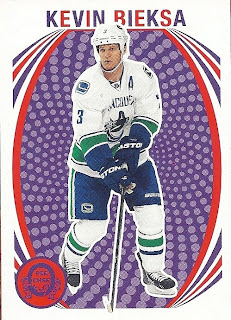 The useless mirror parallel is back as well... 8 per box. The base is a regular foil and the Rookie SP's are a gold foil. I did get 5 SP Rookies. Now to trade them for regular base ones... 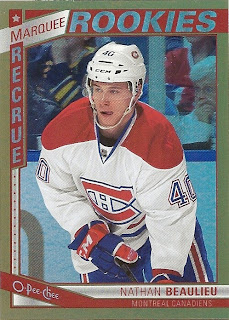 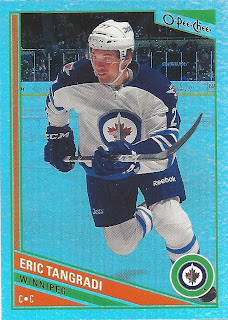 Elsewhere in parallel hell is the black bordered parallel of the foil parallel. These are two per box and numbered out of /100 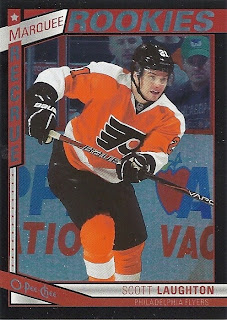 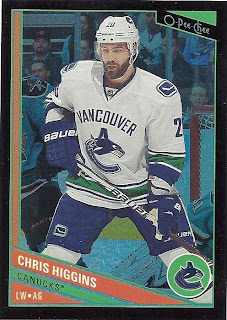 Again this season we have an insert set of stickers! 100 cards again this year. They are 8 per box, I got 10.
OPC must have had some yellow ink left over from last years base set.... 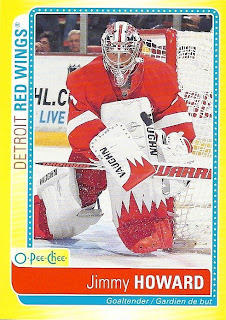 Replacing the unpopular Pop Up set from last year that didn't Pop Up, are equally unpopular Rings.
OPC did this in the early '70's and why they brought them back, no one knows. 50 in the set, 2 per box. 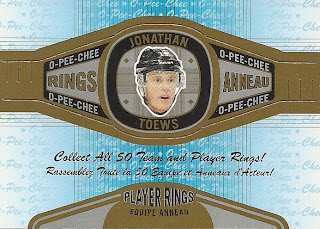 A popular chase set is the manufactured patch cards found this year at 1 per every 3 boxes. I did manage to pull one..... 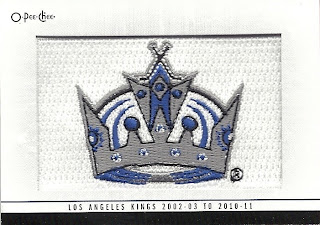 I should be able to swap this for something really good that I actually want.


So there you have it... thanks for putting up with my numbers rant... I cannot believe the collation this year. What happened? Writing an algorithm for this shouldn't be that hard....

Let me know how your box breaks go....


EDIT: UPDATE... by reading a few of the forums where box/case breakers hang out... people are losing their minds over this. Apparently it's product wide and not even case breakers are completing sets.
Posted by Captain Canuck at 10:35 PM