Ahhh... I love the smell of success in the morning. I've been waiting for this one for awhile now. 190 days to be exact. But it was worth the wait. I knew going in he was a reliable, but very slow signer.
Who are we talking about? Why Michel Dion of course! 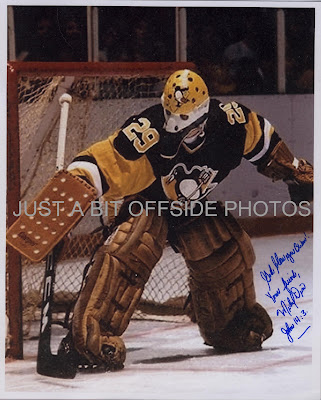 Michel is quite the character. In 1972 he was the number 2 ranked catcher in the Montreal Expos organization. The number 1? Yeah, Gary Carter. So knowing the writing was on the wall, Michel turned to hockey. 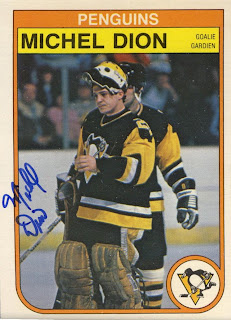 Michel finished his NHL career with Pittsburgh, and still plays for them occasionally in reunion games. 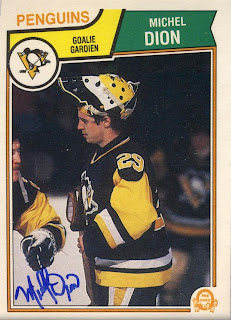 After 5 years in the WHA, Michel joined the NHL as an original member of the Quebec Nordiques. Mr Dion does not have a lot of nice things to say about the Nordiques organization. 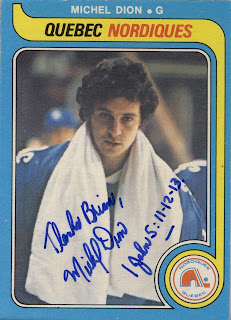 Upon leaving Quebec after two years and signing with the Penguins, Michel was examined by team doctors and asked why he didn't bring his contacts or glasses to the exam. Glasses? he asked.
For a direct quote from Michel... "The doctor said I had no depth perception. The Quebec management knew but they didn't do anything about it. Last year, I noticed more screen shots and blue line shots were going in. I just didn't realize that it was because I needed contacts. I can't even drive a car in Pennsylvania with my eyes. How can I stop pucks going 100 miles per hour?"

Michel is now a Master Golf Teacher and instructs PGA players from his home in South Carolina.
Thanks Michel!!!!
Posted by Captain Canuck at 8:11 PM