In the Game Ultimate Bonanza...

So I was walking by a seller at t he card show when I see him writing on what looks like graded cards. Why is he writing on graded cards? Turns out he was marking down prices, but they weren't graded cards. They were slabbed cards from various In the Game Ultimate Memorabilia releases... This is a product that I have never busted myself. No idea how much a pack of these went for, but I'm pretty sure it was over $100 for three cards... and that ain't me.
So on with the cards rescued from the markdown box.
The greatest defenceman to ever play the game. Doug Harvey. Yeah, you heard me. This seems to be the "base card" series four version of what comes in the pack. This particular base card is numbered 13/30. So even the base cards are "scarce". 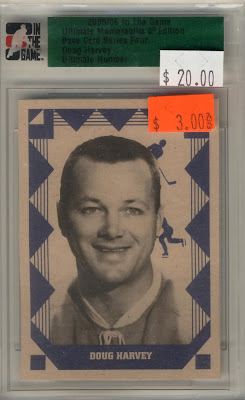 The series three base cards from that same set are numbered /40. This one shows off Hall of Fame goalie Bill Durnan. 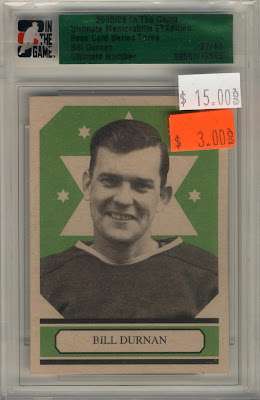 The next year brought colour to the base cards.... one series, numbered to /90. Again, we see goalie Bill Durnan. I really like these sketch cards.... 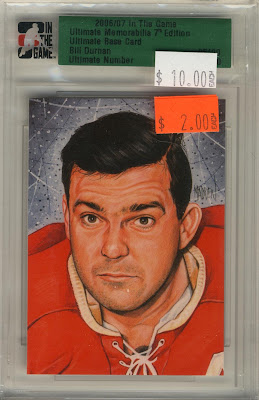 Enough base! Everyone wants to see autos and game used equipment! So on we go.... this is actually the card that got me looking at the box in the first place. He marked this one down to $5.
An auto of Hall of Fame Leaf Darryl Sittler /50. 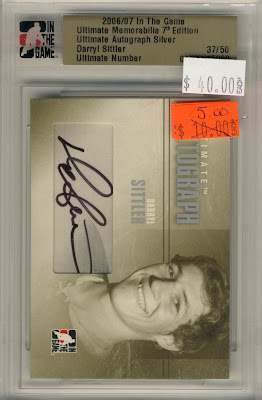 Now, one of my favourite purchases from the show. Long time readers know I grew up next to Joe and Jimmy Watson's house. I was thrilled to acquire this game used emblem card of Joe Watson. Numbered 7/10. 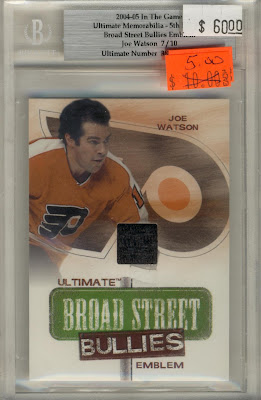 here's where it gets whacked. If you thought an auto of Darryl Sittler for $5 was awesome, how about trying a game used jersey / auto of Hall of Fame defenceman Denis Potvin for $5?!?! Are you kidding me? Numbered /40. 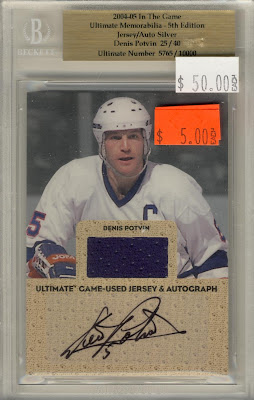 oh, there was one card left in the box.... I couldn't leave it there alone, so I brought it home with me. 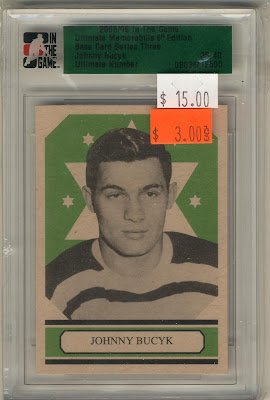 No idea why.... but I'll find some Bruin fan somewhere eventually that has some Montreal card I want and will want this....

So what do you think??? A Sittler and Potvin slabbed low numbered auto for $5??? Yes please. I love the end of the year shows....
Posted by Captain Canuck at 10:26 PM