Diving into the deep end...

Stuck at home, sick like you wouldn't believe. Sinus congestion like a submarine that's gone too deep. Of course, I still had to get up early, drive across the city, and mow the front and back lawns of my wife's grandmother before it rained today.
She just had surgery last Thursday... fighting cancer. For the second time.
Yeah, she wins. I'll take the cold.

In between that and napping, I thought I might put up a couple of cards I purchased at the last card show I attended in Edmonton.
While the show was smaller and more focused than I would have liked, I still managed to come home with a nice haul.

This was my first purchase. I had barely walked in the hall when a buddy of mine flagged me over. He never sells at the local shows, but wanted to give it a go at this one. 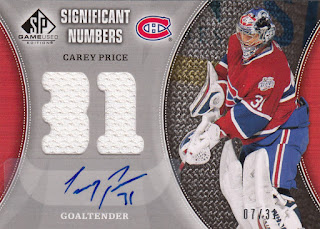 that's a beauty right there. Numbered to his jersey number, good, clean auto. He wanted $20 for it. So I caved. Now that the whole world finally agrees with me that Carey is the best goalie around, his cards are doing up in price faster than our city taxes.
How he had this and not showed it to me during any of the last 100 trade nights we've seen each other is beyond me.

I hardly ever buy cards that expensive, but every once in awhile it's nice to add a significant piece to the binder.

Another local guy waved me over to his booth. He's never set up at any of the local shows, but I've seen him 3-4 times at a local trade night.

He had this one prominently displayed. He asked if he had it priced right, knowing that I was a Habs guy. 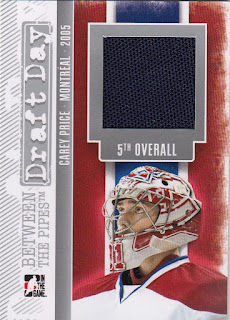 He had it priced at $20. I then showed him what I just bought for $20. His face kinda fell a bit when he realized how overpriced he was. I told him to put $10 on it and hope to get $5. After all, it was only a jersey card. And around here, jersey cards aren't worth spit. Try trading them. I dare you.

He asked if I had it already or not to which I replied no. He said if I would pay the $5, I could have it.

Whoops. Kinda painted myself into a corner on that one.