Tonight Montreal went into Boston and beat the Bruins as they usually do. That's their sixth straight win in the Garden.
Tuukka Rask can't beat the Habs, 3 wins in 20 games, and both Carey Price, 7-1-1 in his last nine against Boston, and tonight's starter, Peter Budaj, own very good records against the Bruins.

More of the same this evening. Budaj stoned the Bruins in a 2-1 shootout victory.

But of course, with Boston there's always drama. Known league wide as a team with more than their share of cheap shot artists and a club that likes to intimidate their opponents.... except Montreal. It just doesn't work on them lately.

Case in point early in the first, Montreal's Alexei Emelin hit Milan Lucic with a beautiful hip check at center ice. Lucic went up and over landing hard on the ice. 6'9" Zdeno Chara came rushing over to cross check Emelin from behind, earning him a two minute penalty.
Lucic got up and speared Emelin, albeit a glancing blow. Can't blame a guy for trying. Better luck next time Milan!

After the game, Lucic called Emelin "a chicken". This from a guy who never hits a guy from the front, always from behind. Similar to Chara. Nailing Emelin from behind.

the Bruins like a lot of things from behind. 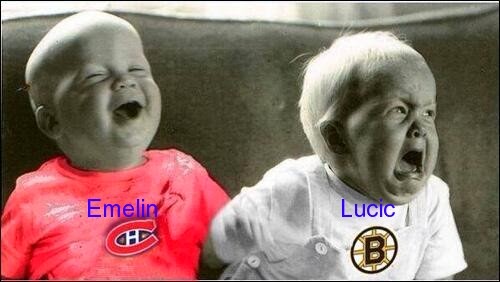