The last card show of the 'year' was today. Things will start up again in September.

It was a pretty low key affair. This was the first time ever there was a card show in June around here.... It was good to hang out and chat with a few people.

Card wise it wasn't much to get all excited about. I raided a quarter box for about 5 bucks worth. My big purchase was picking up some Mask cards for my 2012 ITG:BTP Masked Men set.

7 Masks for $20. A little more than I've spent on the ones I've acquired so far, but still a decent price. 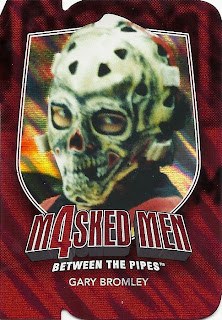 Jonas Hiller showing off the mask he wore for 'Mo-vember'. Pictures of all of his teammates, with moustaches drawn on them. Nice. 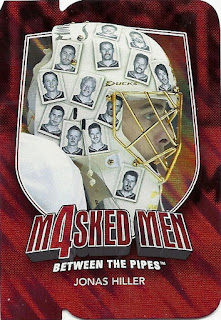 Dwayne Roloson with, I believe, Thor. I think we'll be hearing a retirement announcement from Mr Roloson any day now. 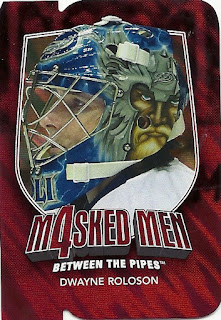 Miikka Kiprusoff! You can't go anywhere in Calgary on any given day and not be involved or overhear a conversation about if Kipper will accept a trade, be traded, etc.... 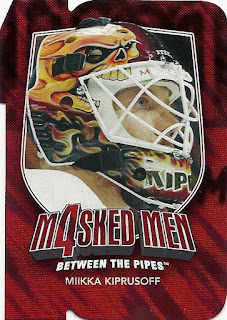 The Penguins new goalie, Tomas Vokoun. I wonder how Fleury took that news? 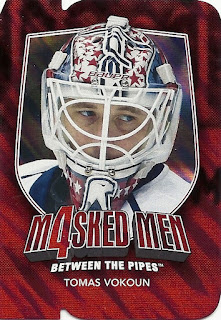 Carey Price wearing his charity mask to be auctioned off to help fight breast cancer. I already had Carey in my set, but this one can go in my Carey binder. 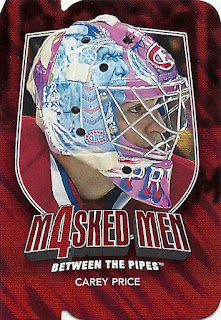 Finally, Patrick Roy. One of two Roy cards in this set. The other featuring his Avalanche mask. 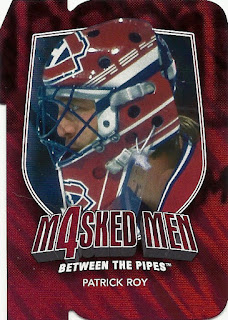 I used to have CuJo, but gave him to a buddy who needed him as he was closer to his set. Now I still need him. Figures. I also have a Quick, but the gold /10 version.